The Other Rio — Glaucio: I've Saved Some Kids, Lost Some Too

The first of a three-part series of oral histories from the favelas of Rio de Janeiro, so close and yet so far away from the Olympic spotlight.

The following is part of a series of first-person narratives from residents of Complexo da Maré, a low-income favela in Rio de Janeiro, as told to Sascha Bercovitch, a Harvard University graduate working on a fellowship on life inside Brazilian low-income neighborhoods. The stories stand in contrast to the glamour and billion-dollar investment in the Olympics taking place just across town.

RIO DE JANEIRO — I was born in the community of Maré, in the General Hospital of Bonsucesso, and I lived in Nova Holanda until I was eight years old. Ours was the largest house on the street — my father worked at Petrobras and we had real (economic) stability. We traveled, we even lived in Rio Grande do Sul while my father was constructing our house, and every weekend we would come to Rio.

When I was 8 years old my father abandoned us — the day that he separated from my mom it was as if he had separated from his children too. We didn't starve because of our aunts, the sisters of my mother. Every month, my aunt would arrive in her husband's car with our groceries, and she allowed us to eat at her husband's bakery. Every day in the morning we'd get the bread, milk, and butter, and every afternoon we'd get the bread and bologna. From my father's side, my grandparents, just like my father, just like his sisters, they all lived nearby, but they abandoned us. Last year my father died and I didn't feel much pain.

Since my Mom wasn't able to raise three children on her own she sent my brother and me to the northeast to live with my grandparents. What we did there was take care of the small farm my grandfather had. I got up at 5 in the morning to cut grass for the cattle. In the afternoon I collected food scraps for the pigs. I studied, but when they had those meetings with parents at school no one went. My grandmother was sick, my grandfather was working, and so when someone did go it was a neighbor, someone my grandmother would ask because she couldn't go herself.

After 10 years, my grandfather died of a heart attack and we had to return to Rio. I went to live in Nova Holanda in the homes of friends. I had never liked soccer, I didn't even know what soccer was, but one day some friends invited me to play, and since I didn't know how, I stayed on the edge of the field directing the team. From that day forward an interest awakened in me for coaching soccer. My friends suggested that I set up a project for the children, and so I did in Nova Holanda. During the first week, there were 12 athletes, during the second there were 50, during the third there were 100, and by the next month there were 200. From there, I had to stop the project. Since there was no help for it and I lived in a friend's house, I had to work in order to help him with his expenses. I went to work in my uncle's bakery, and when he came here to Vila do Pinheiro I came with him. And so I formed my current program, Rogi Mirim, here in Pinheiro.

No sponsors, no problem

In the beginning we trained with balls that were loaned to us. This field here was full of holes and rocks, it was crooked, it didn't have fences, and people would walk through during the middle of our practices to get to the street behind it. But even during that time I was thinking big. I had never played soccer but I studied, I read, I bought books to learn tactics to run practices, I downloaded videos on YouTube. In 2007 we began competing, and today we're the five-time champion of the Roberto Dinamete Cup, a league organized by Rio de Janeiro state; we've won the FAFERJ Cup, the federation of favelas of Rio de Janeiro; we were the runner-up in 2013 of the Carioca Cup, the championship of the Soccer Federation of Rio de Janeiro state, the largest body in the state, and last year we got to the semifinal. Today we have 250 children registered in the project and no one pays a real. I don't receive one real, we don't have sponsors — it's entirely free.

My work nowadays is more temp jobs: I'm a baker, I'm a bricklayer, I worked with a carteira assinada as a retailer, taking care of the stock at businesses. But I'm not working a steady job because I haven't found one that would allow me to continue with this project. If I had a job, at this time of day I'd be stuck in the 5 p.m. traffic trying to get home — how am I going to run practice for these kids? Our practices began at 3 p.m. — what job is going to let me leave at that time to get back here?

Everyone talks about the favela. They say that favelas are violent, but they're not — people create a type of horror here that doesn't really exist. The gangs do their business with drugs and we live our lives. Within Maré you know what there is? A lot of residents, a lot of hard workers, a lot of good people, people with grit, because in order to live in a favela you have to have grit, you have to be a guerreiro. There were a lot of shootings when the army was here the year of the World Cup, but after they left there weren't any more. The police do their operations but not every operation has shootings, and so the people create all types of exaggerations because they don't know Maré.

On the day that the army occupied Maré I said to the kids that we were going to have practice as normal, so at 2 p.m. the military was entering the favela and I was running practice. Soon after a car from SBT, one of Brazil's largest news stations, passed by in front of the field. The car stopped in front of us and called over to me:

I went over. He said: "Could you tell me where the shacks are around here?"

He said: "No, you know, the shacks with the open sewage?"

I said: "We don't have that here. But you see those kids over there? It's a project that I've been doing 18 years without help from anyone. You could do a piece about the project, you could interview some children — on the day of the occupation, there are 60 kids going to practice."

He said: "Unfortunately, we can't do a story about that because we're looking for the shacks with open sewage."

I became indignant. Journalism nowadays in Brazil — it's not just in Rio, it's in all of Brazil — only wants to show death, it only wants to show misery. The good things within the favela, no one wants to show them. The police come, they carry out an operation, and there's a whole mountain of journalists who come in with them and report: "So and so was arrested! What horror — a resident was shot and killed on his doorstep!" But no one shows 250 kids practicing every day on my field.

Do they forget that we exist? That we're here inside, that we're normal people, that we live, that we work, that if a business outside functions it's because people like us from the favela work in them? We're good enough to work in businesses, to work in the homes of millionaires, but we're not good enough for them to come here to do a story about us, to see if we can find support for this project?

Good and bad together

Here inside, we say that there's no violence, but the bad side and the good side exist everywhere. And so as a result of this program, instead of a kid being left alone in the street, he's here with us. It gives me a lot of pride to say that I've gotten a lot of adolescents out of the drug trade. I've also lost a lot of adolescents to it, because my fight against them is an unfair one: I don't have anything to offer, the drug gangs have things to offer. 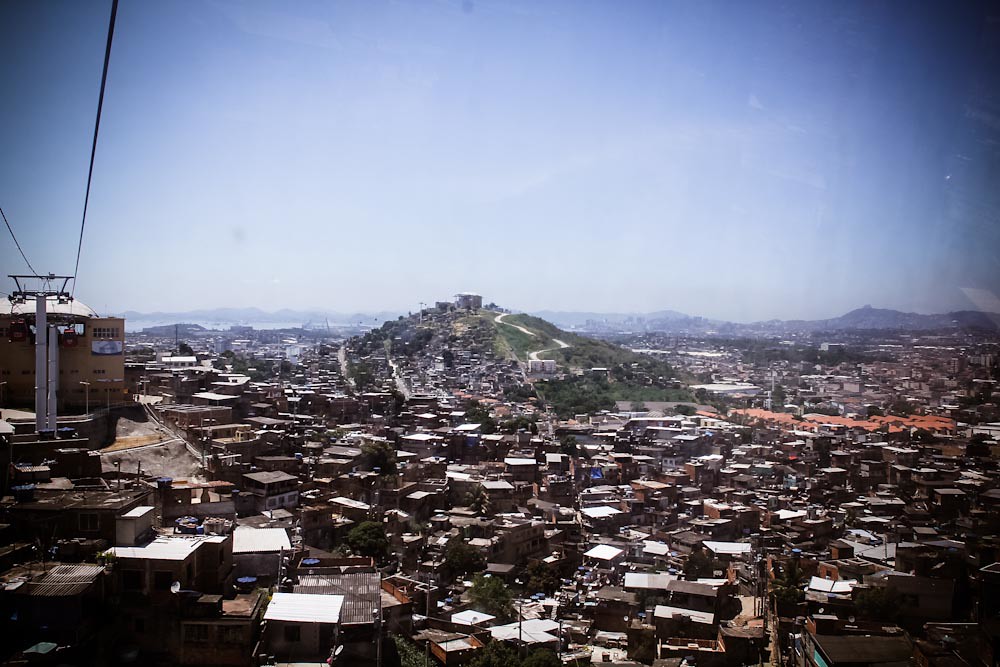 But I'm going to fight, I'm going to get out who I can, help who I can, struggle for who I can, fight for who I can. The importance of this project in the life of these kids is everything — it's everything, it's what removes them from marginality, it's what gets them off the street, it's what makes them become good people. Before and after every practice I sit down with them and I explain the situation of life, that the future isn't in drugs and partying, that you have to study to be somebody, to give a better life to your family. Since I began the project I've told them: "We have to go piece by piece, one step at a time."

No one from my family lives in Maré anymore. My sister lives in Recife, my family lives in Itaguaí — the only person from my family in Maré now is me, it's been 10 to 15 years that they all left. My mom always bothers me: "You have to stop that program, there's no future in it, it doesn't make any money." But she doesn't know that this here is the dream of my life. I'm not going to give this up for anything — only the day that I die, and even then I'm going to leave it to someone.

We've already trained players who today are coaches with us. There are others who are studying in university, and others who have already graduated from university. There are stories that I'm not going to tell only because I'd be here until tomorrow morning telling them. There's the story of the little boy who scored a goal and ran and hugged me in the middle of the field. There's the 5 p.m. practice with the little kids: When they see me arriving they all come running screaming, "Glaucio! Glaucio!" Those things are why I won't stop. It's those things that give me the force to continue struggling, knowing that even without money, even without support, we're making a difference for them.

Ponto. Let's end before I start crying. This project is everything to me. The kids are calling for me, it's past 5 p.m. [laughs]. Can I start practice now?

Sascha Bercovitch studied Latin American history at Harvard University. He has spent the past year living in Complexo da Maré, the largest group of favelas in Rio de Janeiro, on a Trustman Postgraduate Fellowship.

This is Worldcrunch's international collection of essays, both original pieces written in English and others translated from the world's best writers in any language. The name for this collection, Rue Amelot, is a nod to the humble address in eastern Paris we call home. Send ideas and suggestions at info@worldcrunch.com.

Mark Zuckerberg's Manifesto Is A Megalomaniac and Authoritarian Document

-OpEd- I've just finished reading the manifesto Mark Zuckerberg wrote on the future of humanity. I've laughed a lot. But afterwards, when I reached the end, a serious question took root in my ...