CAIRO — A third of Cairo's residents walk, cycle or use carts as their primary means of transportation, while in Egypt's provincial cities, such as Shibin al-Kom in Monufiya, more than half the population is motor-free.

The state, however, insists on fighting users of non-mechanized vehicles, especially donkey carts. Most governors have tried to ban them by imposing harsh penalty fees, far harsher than those imposed on other modes of transportation. The penalty is almost equal to the price of the cart itself, and sometimes the cart is destroyed and the donkeys or horses killed and fed to zoo animals.

There have been recent moves by the governors of Cairo, Giza Qena and Assiut to ban carts which, as officials argue, disrupt the flow of traffic and do not project a civilized image of the city.

President Abdel Fattah al-Sisi is known for cycling. Along with other state officials, he has advocated for the increased use of bikes, which surely also disrupt the flow of traffic, although they may look more civilized.

We should not forget that traffic laws in countries we consider civilized, such as Britain and the United States, allow carts on their roads. And in comparison to other vehicles, carts pose much less of a threat to passengers and pedestrians. We have yet to hear, for example, about a cart running over a pedestrian.

The ban on carts in Egypt cannot be dissociated from their status as a poor person's vehicle. Carts sustain thousands of households, supporting low-income families in their work and mobility. They are a significant economic pillar for their owners, makers and users, as exemplified by recent protests in Assiut.

They also directly bolster the Egyptian economy, saving billions of pounds in fuel annually, at a time when energy subsidies have reached a quarter of the state's expenditure. This all happens without any governmental interference, initiatives or awareness campaigns.

Carts could be re-incorporated onto the city's streets through dedicated lanes in the areas in which they operate. The use of carts could also be expanded to natural reserves, tourist resorts and areas that are particularly sensitive to pollution. 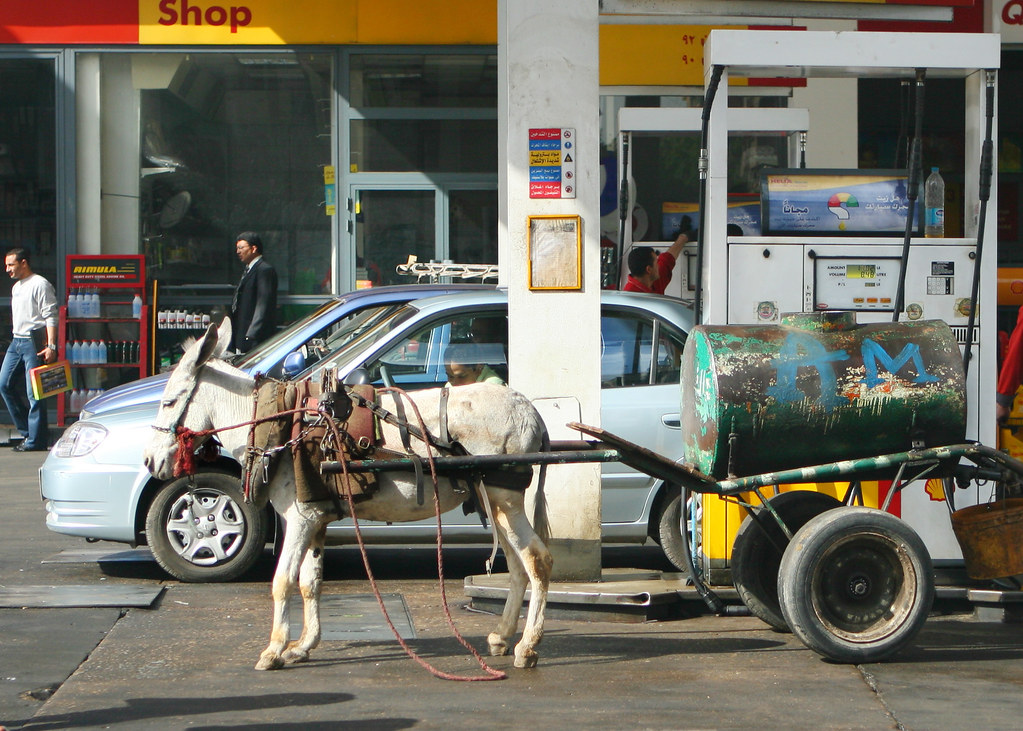 Am Salah, a former donkey cart driver, insists that carts are actually the smart vehicle of the city. He says he can transport virtually anything in exchange for a fare — gas cylinders, refuse or construction waste — because donkey carts are especially adept at maneuvering their way through landfill sites. They also happen to be less costly for customers than cars.

The carts come in all shapes and colors. There are regular carts; Sawahli carts, long ones used to transport steel rods for construction; carettas, with two wheels; and carriages, which have four wheels are are used to transport people. Some owners decorate their carts, though not the ones they use for work — "except in Alexandria where everyone decorates their carts whether for work or not," says Salah.

Many households in Old Cairo and in the cemetery area have carts, although they're much more common in Giza. The reason for this is that the former governor of the Egyptian capital tried to ban carts several times. "Before the revolution, we were forbidden from passing in front of churches and near Amro Ibn al-As mosque before 2 p.m. because of the tourists. And of course, we were not allowed along the Nile Corniche."

A Cairo governor also tried to ban carts in Giza, because many of them start their journeys there. But the local governor told him that he wouldn't ban carts as long as they adorned Egypt's 20 pound note.

Despite his fondness for donkey carts, Salah no longer has one. He bought a used pickup truck instead, so as to avoid the kind of problems he had once when driving on the Ramadan 10 Bridge.

"A car behind me was honking, so I gestured with my hands to tell the driver to pass alongside me," he recalls. "It turned out he was a police officer and he pulled me over, got me off my cart and beat me up until I lost hearing in my left ear."

The pickup set Salah back about 40,000 Egyptian pounds (nearly $5,000), far more than the price of a cart and horse, which together can be had for approximately 5,500 Egyptian pounds ($685). The expense was a tough pill to swallow. But it's not the only thing that made giving up his cart such a difficult choice.

"Some people just believe that the horse brings good fortune," he says. "They like to have a cart, even if they can afford a pickup."

CAIRO — After Asmaa Hamdy's release from prison, where she spent three years, she began the desperate search for her fiancé who had disappeared shortly before she was let out. A dentistry ...

The promise of the Tahrir Square protests has been largely unfulfilled. Yet there is some progress in how Egypt faces harassment against women.