Austin, Texas may be the first of many "sanctuary cities" that disobey President Donald Trump's hardline immigration policy.

"Do we stand up for human rights now? Or do we act like zebras on the Serengeti, hoping the lion eats us last?" said Rigby, 66, the longtime minister of one of Austin's most liberal houses of worship. "People of good conscience," he said, must put themselves between asylum seekers and "harm's way."

Rigby is part of a growing movement determined to oppose President Trump's policies for cracking down on immigration. While thousands of protesters gather nationwide to decry Trump's temporary travel ban on refugees and on citizens of seven majority-Muslim nations, Rigby and other activists in cities with large immigrant populations are bracing for what they fear will come next: a wave of raids and deportations.

Trump has called for the deportation of as many as 3 million undocumented immigrants who have committed crimes on U.S. soil. In one of his first acts as president, Trump ordered the Department of Homeland Security to look at withholding federal funding from cities that refuse to assist immigration officials, a loose collection of municipalities known as "sanctuary cities."

Austin has become the first battleground in that conflict, where the governor and a local sheriff are now locked in a standoff over the issue. A liberal enclave in the heart of conservative Texas, the capital city lies a little more than three hours from the Mexican border. About 35% of its 931,000 residents are Hispanic, according to U.S. Census estimates, and the city is home to a vibrant sanctuary movement that sprang to life during President Barack Obama's first term, when his administration carried out a record number of deportations.

In November, voters in Travis County, which includes Austin, elected a new sheriff, who campaigned on a promise not to detain people based solely on their immigration status. Hours after Trump took office, Sheriff Sally Hernandez, a Democrat, posted an eight-minute video on her official website explaining the new policy, which took effect Wednesday.

Republican Texas Governor Greg Abbott, a Trump supporter and immigration hardliner, quickly fought back, accusing Hernandez of playing "a dangerous game of political Russian roulette — with the lives of Texans at stake."

This week, Abbott made good on a threat to withhold $1.5 million in state criminal justice grants, money that funds services for veterans, parents struggling with drug addiction and victims of family violence. He also asked state agencies by Friday to prepare a full list of all state funding provided to Travis County, suggesting that additional punishment may be forthcoming.

"Some law enforcement officials in Texas are openly refusing to enforce existing law. That is unacceptable," Abbott said in his annual State of the State address this week. "Elected officials don't get to pick and choose which laws they obey. To protect Texans from deadly danger, we must insist that laws be followed."

Abbott called on lawmakers to act urgently to ban sanctuary cities. A measure drafted by state Sen. Charles Perry, a Republican and Abbott ally, would withhold state funding from cities, counties and colleges that do not comply with immigration detainers. It also would require county jailers to determine and record the immigration status of every arrestee. Supporters and protesters of the legislation crammed into the Texas statehouse Thursday for a hearing of the bill, which, as Perry acknowledged under questioning, does not actually define "sanctuary city."

Last week, Abbott threatened to oust Hernandez, who was elected with 60 percent of the vote. Legislation to permit him to do so has yet to be filed, but a spokesman for Abbott noted that the threat to cut off state funding was sufficient to persuade the Dallas County sheriff to abandon sanctuary policies last year. 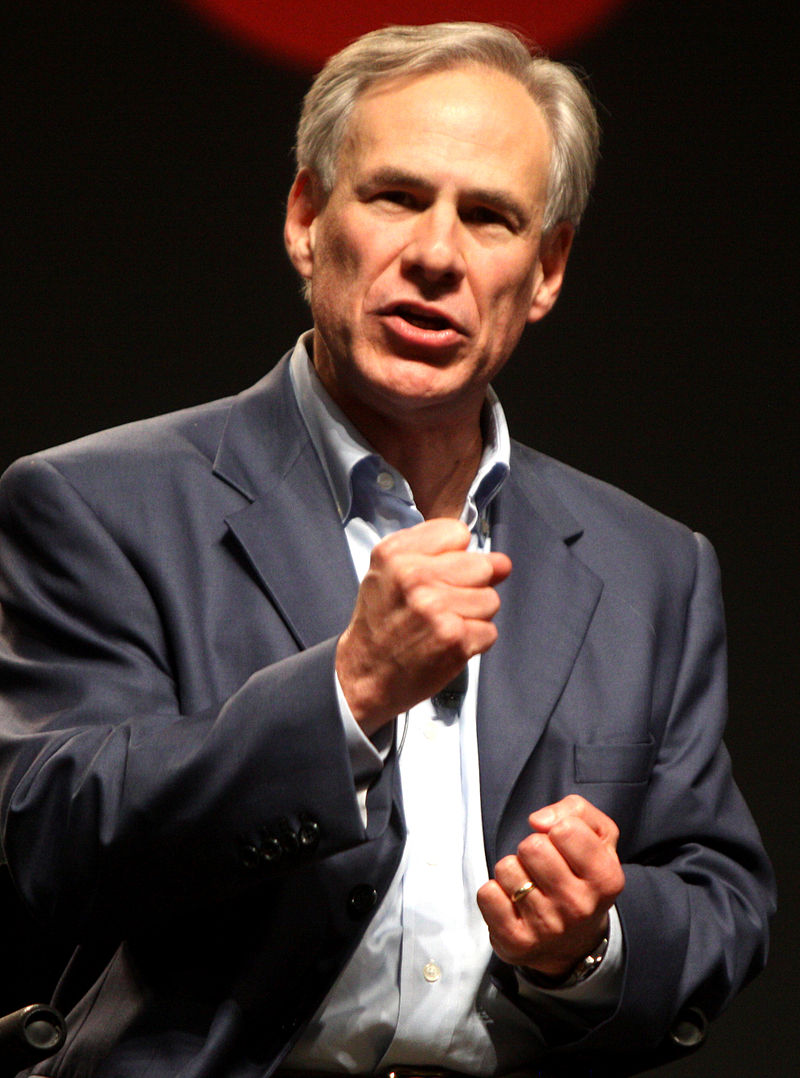 Austin, however, is standing firm. Democratic Mayor Steve Adler, and other city officials have vowed to support Hernandez, arguing that most undocumented immigrants do not pose a threat to the community and that deportations have ripped local families apart.

Travis County Judge Sarah Eckhardt, a Democrat, says she, too, stands behind the sheriff. More aggressive deportation "would absolutely wreck" the state economy, she added, ticking off half a dozen Texas industries - including agriculture, construction and biotech - that rely on immigrant labor.

Besides, she said, Travis County is not alone in ignoring immigration detainers.

"The only difference," Eckhardt said, "is that Sally Hernandez had the guts to write down what she's doing."

Hernandez declined requests for an interview. Under her new policy, Travis County will not comply with requests from immigration authorities to detain people on the sole basis of their immigration status. If DHS finds someone who is undocumented, and that person is charged with murder, sexual assault or human smuggling, Hernandez says she will comply with federal requests to hold the person for 48 hours so they can be taken into custody by the U.S. Immigration and Customs Enforcement, or ICE, and ultimately deported.

However, if the person is accused of committing a minor infraction and would otherwise be eligible for release from jail, Hernandez says she will not hold them unless ICE obtains a warrant.

Federal courts have repeatedly concluded that local jailers have no legal obligation to comply with ICE detainers. Moreover, courts have said that holding someone without a warrant could violate their constitutional rights, putting jailers at risk of lawsuits.

Hernandez has also argued that enforcing immigration laws undermines trust in her deputies, who depend on the cooperation of people in the community to solve crimes.

"Our jail cannot be perceived as a holding tank for ICE," Hernandez said. "We cannot afford to make our community less safe by driving people into the shadows."

Supporters of the sanctuary city ban say Perry's bill includes protections for witnesses and victims of crimes. Meanwhile, Abbott has said that Hernandez's policy would have led to the release of more than 50 dangerous criminals since she took office, including people accused of sexual assault and aggravated assault with a deadly weapon. Travis County officials said they are reviewing that claim.

Although Austin is the first sanctuary city to face a loss of funding, Trump's executive order means cities nationwide could soon confront the same harsh choice. Democratic New York Mayor Bill de Blasio has vowed to "defend all of our people regardless . . . of their immigration status." And Boston Mayor Marty Walsh, D, has invited people at risk of deportation to seek shelter at City Hall.

This week, San Francisco City Attorney Dennis Herrera filed suit, calling Trump's order on sanctuary cities an infringement of local control that is "not only unconstitutional. It's un-American."

Said Rachel Rosenbloom, a professor of immigration law and policy at Northeastern University: "Cities are definitely emerging as the protectors of immigrants." Since Trump's election in November, she said, "there have been a number of cities that have really doubled down on their support for immigrants."

In Austin, sanctuary activists applaud the new sheriff's stance. But they say that keeping ICE out of the county jail will not be enough to thwart the crackdown. So they're planning mass acts of civil disobedience, soliciting churches to shelter undocumented immigrants, developing neighborhood warning systems so people know to hide when ICE comes through and training volunteers to act as human shields.

"Our plan is to prepare 500 people to do sanctuary in the streets," said Alejandro Caceres, 29, a legal resident from Honduras who leads the ICE Out of Austin campaign for the civil rights group Grassroots Leadership.

Ramirez, a tiny woman with a shy smile, has become something of a poster child for the movement. On a recent weeknight, she and her son, Ivan, appeared at a fundraiser and, through an interpreter, told the story of crossing the U.S. border, being detained by ICE for months and then being filled with fear upon their release from custody while federal officials considered her application for asylum.

That application was eventually denied. But Ramirez received a stay last fall that has temporarily lifted the threat of deportation.

The audience, mostly white and older, applauded Ramirez and then sang along with a visiting folk singer who belted out lyrics about peace and justice while strumming a guitar.

Afterward, Ramirez returned to her makeshift bedroom at St. Andrew's, an unremarkable structure with white walls, a sloping brown roof and a modest steeple on Austin's far north side. A banner outside read: "We stand with our Muslim neighbors."

Rigby, the church minister, acknowledges that sheltering an undocumented immigrant is risky. "When you're aiding someone who is being called a criminal, you're protecting them in your church, you can be charged with violating federal law," he said.

But Rigby insists that Americans have a humanitarian obligation to provide shelter to innocent people fleeing violence and lawlessness - even if it means defying the government in Washington and the Texas statehouse.

"You got a president and a governor who are rattling swords," Rigby said. "Would you protect people being hunted? Well, now we get to find out the answer."