Leadership By Bluster, A Preview Of Trump's Reality TV Presidency

WASHINGTON — For Donald Trump, little is more intoxicating and affirming of his own power than creating tornadoes and watching them tear across the landscape.

In the space of just 24 hours this week, the president-elect set off cyclones near and far that preview the drama he seems likely to bring to the White House.

Trump summoned two dozen television executives and news anchors to his offices Monday to berate them as dishonest and disobedient. He sought to strong-arm the British government into appointing his Brexit ally, Nigel Farage, as ambassador to the United States. He dropped his threat to prosecute Democratic opponent Hillary Clinton, disregarding his "lock her up" campaign chant and incurring the wrath of some reliable supporters.

Then there was Tuesday's meeting with The New York Times, the newspaper Trump loves to mock as "failing." It was scheduled, then canceled, then rescheduled. And once the president-elect settled in at the Gray Lady's boardroom, he softened his position on climate change, floated the idea that his son-in-law could broker peace in the Middle East, voiced new doubts about the effectiveness of torturing terrorism suspects, savaged Republicans who wavered on his candidacy and left unresolved concerns about how - or even whether - he would dissociate himself from his global business holdings to avoid conflicts of interest.

Welcome to Trump's world, a never-ending drama in which the star lives in the moment and careens from controversy to controversy with a dizzying flood of tweets and seemingly off-the-cuff remarks to the media.

This could become Washington's new normal, as a billionaire who thrives on impulse, defies protocol and lives to entertain prepares to move into the White House. Trump's presidency will be a striking departure from that of Barack Obama, whose White House operates with the "no drama Obama" mantra.

This is a transformation Trump's legions of supporters are hungry for.

"People did elect change," said Sam Nunberg, a former Trump adviser. "He is a novel character. We've never had a magnate - a successful entrepreneur and celebrity who understands the tabloids and media saturation, and who thrives off it - elected. He's going to be the most open president we've had in terms of engagement. He's a people person."

Sean Wilentz, a presidential historian at Princeton University, said Trump's "reality show ruckus" has been striking and without precedent. "No previous president-elect, let alone president, has acted with the high-pitched drama that Trump has displayed," he said. "Five crises a day - keep 'em coming."

Through more than four decades in business, Trump has taken pride in seeming to be both unpredictable and a somewhat mischievous rule-breaker. He delights as much in telling tales of misbehaving as a schoolboy as he does in describing how he maneuvered bankers into letting him keep control of his casino empire even after his companies had suffered a series of bankruptcies.

Trump took that advice to heart, providing news reporters with a steady stream of stories about his playboy social life, renegade business style and provocative positions on controversial issues. In 1990, at the height of the tabloid frenzy over the dissolution of Trump's first marriage, he said, "The show is Trump, and it is sold-out performances everywhere." 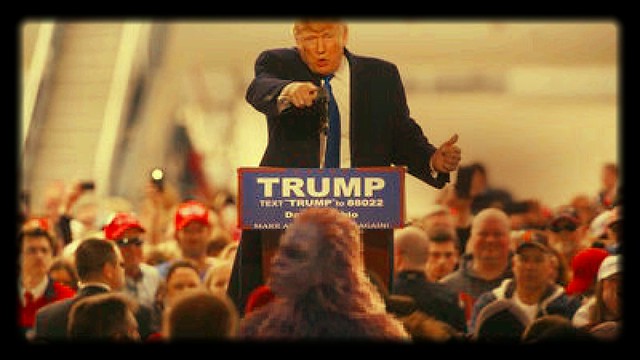 During the campaign, Trump often seemed not so much annoyed as perplexed when news reports pointed out that he had contradicted himself or shifted positions on issues such as abortion or the Iraq War. "Who cares what I said 10 years ago?" he asked in a June interview with The Washington Post. "Nobody cares except you."

Trump explained that when he was speaking to large crowds at his rallies, he often looked not at the people down front but at the bank of TV cameras, checking to see if the red lights on the cameras were ablaze, indicating that his words were going out live on cable.

"I would say something new to keep the red light on," Trump said - and if that happened to diverge from what he had said years or even weeks before, that was secondary to keeping the red light on.

Aboard Clinton's campaign plane, meanwhile, the candidate and her aides would catch up on news and become agog by what they read about Trump's performances. Matt Paul, a former senior Clinton adviser, recalled in an interview shortly before the election, "People would just stop and say, 'What?!' And [Clinton] would say, 'What?!' "

Being provocative - being the bad boy who would, as one of his final campaign TV ads put it, "turn Washington upside down" - is central to Trump's conception of himself and his presidency.

A president who flips positions in pre-dawn tweets is a new phenomenon, but nonetheless one to which the world's leaders and diplomats could adapt, said Ryan Crocker, a former U.S. ambassador to six countries in the Middle East and Near East.

"Foreign leaders and diplomats are generally less concerned than many Americans are about the direction of the Trump presidency," said Crocker, who teaches at Texas A&M University and was a signatory to a letter that 75 retired senior diplomats sent in September opposing Trump. "They say, 'Don't worry, you're a nation of laws, a system of institutions."

Of Trump's position flips and overnight tweeting, Crocker said: "Clearly, this is a style none of us are used to. Can you name another president who would come anywhere near how he operates? But personality is policy, and it's good that he is reaching out to foreign leaders, even if he's not following the protocol manual. He has a real opportunity to start building some international relations, and people overseas will adapt."

Every phase of Trump's career has featured a roller-coaster ride of relations with the news media, from overheated praise and near-wonderment at his successes to searing and embarrassing reporting on his personal flaws and professional failures. And each chapter of his life has led to basic questions about who he really is underneath the bluster and showmanship.

Trump himself often says that he is perplexed by such questions: He is, he says, simply a businessman, in it to win. And the path to winning, he consistently says, involves crushing his opponents, calling out the "losers" who criticize him, and saying what it takes to get where he's going.

In one of his best-selling books, Trump called that methodology "truthful hyperbole" - his term for statements that sometimes reach beyond the facts or contradict his previous positions.

If some people thought he would tamp that tendency to become, as he puts it, "absolutely presidential," his activities in the two weeks since the election indicate otherwise.

How will President Trump govern? Throughout his career, he had kept only his own bottom line in mind: "I was representing Donald Trump," he said. If others lost money, that was not his concern.

Now, Trump says, he will work not for himself, but for the country. He has never done that before, he said in the June interview, but will simply make the necessary pivot. "I'll just do it," he vowed.

See more from Trump And The World here