France has long been an innovator in building materials, from the steel splendor of the Eiffel Tower to concrete to surprisingly resistant wood. Environmental factors hold sway.

PARIS — Canadian architect Michael Green thinks the sky's the limit for buildings made with wood. And it was in Paris, with a project called the Baobab Tower, that the "high priest" of wooden high-rises hoped to prove it.

Controversy surrounding the Tour Triangle (Triangle Tower), a conventional skyscraper planned for the French capital, ended up killing Green's 35-story (120-meter) project — at least for now. Paul Jarquin of the company REI France, which collaborated on the Baobab Tower plan along with an architecture firm called DVVD, insists the project has only been postponed.

Even if the Baobab blueprints don't, in the end, amount to anything, the idea behind them — that wood can be used instead of steel and concrete to construct multi-story structures — is making serious inroads around the world.

France is no exception. The best example to date is the Hyperion project, an 18-story (57-meter) housing tower slated for the southwestern city of Bordeaux. The structure, being developed by a firm called Euratlantique and scheduled for completion in 2020, will be roughly one-third concrete and two-thirds French wood.

On the other side of the country, in the southeastern city of Nice, architect Jean-Michel Wilmotte is working on an even taller wood-and-concrete structure. "The building consists of a concrete cylinder around which two wooden hemispheres are attached," he explains. "With a height of 115 meters for 35 stories, it should include a hotel, offices and apartments."

Wooden skyscrapers aren't only a French trend. All over the world — in Australia, Canada, Austria, Great Britain, even Norway — similar projects are popping up. "It's a cultural revolution in which France is playing a part," says Stéphane Bouquet, the head of Ywood, a branch created in 2009 of the French real estate company Nexity. "We are among the pioneers. When we launched into wooden constructions, everyone was skeptical. But not anymore." Among their recent projects is a six-story wooden tower in the Mediterranean port city of Marseilles.

A comeback for CLT

Half-timbered houses from the Middle Ages are proof that using wood for buildings is hardly new. Until now, it was limited to individual houses or mountain chalets, a market that already represents 12% of all constructions. What's new is that builders are starting to think bigger (or taller, to be more precise) for wood-based projects.

Driving the design shift is the emergence of a "revolutionary" material called cross-laminated timber, or CLT. "It's made up of several strips of wood, generally resinous, each of them crossed at 90 degrees," says Guillaume Poitrinal, head of Woodeum, the French distributor of the Austrian company Stora Enso. "The assembled result can be up to three meters wide. Its thickness can be adapted according to needs, and it can be as long as 16 meters. But most importantly, these boards have a resistance and load-bearing capacity that makes it possible to build towers higher than 15 stories."

CLT has actually been around for quite some time. The ultra-solid wood was invented in France by Pierre Gauthier all the way back in 1947. But it sunk into oblivion, with builders favoring reinforced concrete and steel. "In France, concrete is almost something natural. Proud of our technological advance with this material, we took a conservative approach," says Poitrinal. "And so northern countries, the Germans and the Austrians, sort of took the product from us. But France can still react. The resource is there."

Wood use is also being encouraged by the risks of global warming, given the high-emissions associated with concrete production. Producing one cubic meter of concrete, according to the consultancy group Carbone 4, emits 471 kilograms of greenhouses gas. CLT has a far lower impact, so much so that if France could triple its wooden constructions by 2030, it would save 3.1 million tons of CO2 per year, or 25% of France's gas emissions, Carbone 4 estimates.

"Nothing to be ashamed of"

Stakeholders in the construction industry are aware of these changes and are taking great interest in this market in the making. Bouygues Immobilier, for example, is working on an 11-story building in Strasbourg that will be made almost entirely of wood. "Only the ground floor will be made of concrete. Given its significant height, this project will rely heavily on CLT," says Florence Hauvette, the company's eastern regional manager. 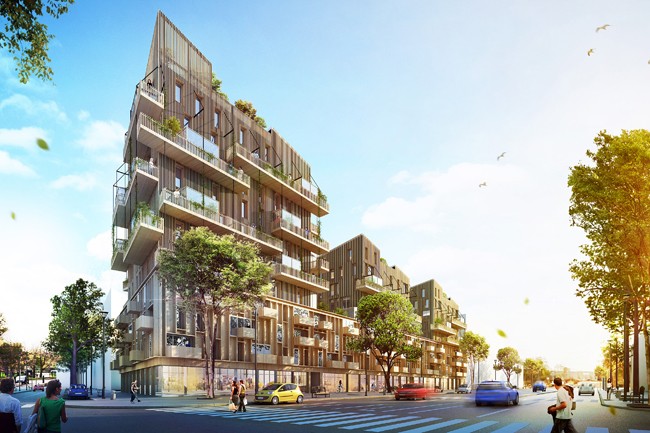 Much of the CLT used here is imported — despite the fact that France has the third largest forest area in Europe. But again, things are changing. The wood sector is one of 10 focus areas in the government's "New Industrial France" project. The industry also celebrated the launch, two years ago, of ADIVbois, an association for the development of wooden housing buildings. "In June, we will start consulting with cities and developers to find five to 10 locations ready to receive 15-story wooden buildings," says Franck Mathis, the association head. "We're also looking into the possibility of 30-story (wooden) buildings."

Talking about a revolution?

The wood construction industry also wants to address what it sees as common misconceptions about the material, namely that it's dangerous, because it burns easily. REI France's Paul Jarquin insists that wood is in fact more fire-resistant than steel or concrete. "In 2001, immediately after the 9/11 attacks, didn't the two World Trade Center towers collapse? Concrete caves in. Steel melts. But not wooden buildings. And the combustion time of CLT is even longer. I challenge you to set one on fire ," he says.

There are also concerns about deforestation to address. But Cyril Le Picard, head of France Bois Forêt center, has worked out that "only 60% of the natural regeneration of French forests is harvested. In addition to this, our forests are managed on a sustainable basis. When a tree is cut down, another is planted."

Le Picard sees the construction of wooden high-rise buildings as a chance to revitalize the French wood industry. "At the end of the 19th century, Gustave Eiffel and his famous Parisian tower launched the steel revolution in construction," he says. "The ADIVbois project looks to trigger a new revolution: making wood the preferred material of the 21st century."