After two years of occupation by terror group ISIS, the largest Christian city in Iraq, Qaraqosh, was recently freed by government forces.

QARAQOSH — Last year, Monsignor Gollnisch celebrated Easter mass in one of the refugee camps of Erbil, the capital of Iraqi Kurdistan. He blessed a Catholic Syrian soldier who was on his way to the front line the next day. Then, in front of Assyrians and Chaldeans, Gollnisch said, "Next year, we will celebrate mass in Qaraqosh."

Qaraqosh is the largest Christian city in Iraq. At that time last year, terror group ISIS claimed 130,000 square kilometers of territory having driven out Christians from their villages. Caliph Abu Bakr al-Baghdadi promised "rivers of blood" and summoned Muslims from around the world to join him.

A year and a half later, this past October, Monsignor Petros Moshe, the archbishop of Syrian Catholics, returned to the Cathedral of Qaraqosh. The city had just been freed by the Iraqi army with the help of coalition airstrikes and ground support. On an altar of stones and protected by just a few guards, Moshe held mass.

"We are back here, we will continue despite what happened," Moshe said after mass, in reference to the al-Tahira cathedral that had been vandalized by jihadists.

Qaraqosh contained more than 50,000 inhabitants, 90% of whom were Christian, when ISIS invaded the Iraqi city of Mosul in June 2014. Two months later and 30 kilometers away, the Kurdish peshmerga military force that was supposed to protect Qaraqosh did not fight ISIS jihadists. Instead, they took refuge in the Kurdistan region and abandoned Christians.

On the night of Aug. 6, 2014, Christians began their exodus from the plains of Nineveh, where they had lived for 2,000 years. Families joined the refugee camps of Erbil, where thousands of Iraqi Yazidis, Shabak people and Shiites were gathered, in addition to 200,000 Syrians who had been thrown out of their country by ISIS. 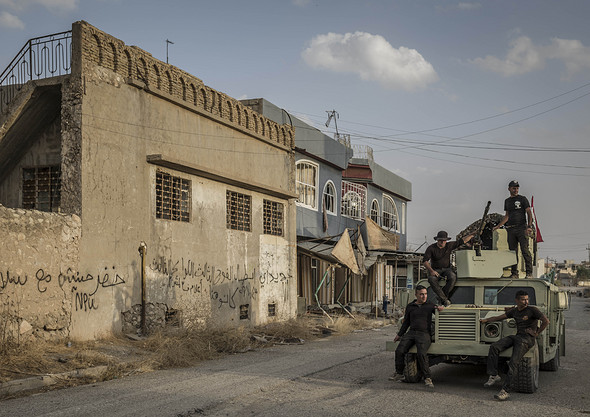 Moshe recently strolled through the rubble in Qaraqosh. He contemplated the burned arches, raised a piece of debris, fixed the blackened columns. In the courtyard of the archbishop's palace, the colonnades were riddled with bullets thanks to a shooting range that had been installed there after the city had been invaded.

"Our ancestors gave their blood for our presence. We don't want to leave the country. But will we have the audacity to come back to live with our neighbors? These neighbors with whom we once lived on good terms but who became our looters?" Moshe asked. The whole problem of the post-war period is in the question raised by the archbishop — Will the Christians expelled in 2014 repopulate their homeland? Do they really want to?

In 1960, the Algerian National Liberation Front had offered a vicious choice to the piers noirs ("black feet"), the French nationals born in Algeria whose ancestors were European settlers — "the suitcase or the coffin." Christians in the Middle East have the possibility of returning but are subject to two conditions. First, it will be necessary to secure the territories Islamists have scattered with mines, explosive devices, and anti-tank traps. Demining units can overcome this problem. Second, people of different ethnicities and religions need to be able to live together again. This is the more difficult task.

With the entry of ISIS, the cauldron exploded, opening the fractures of civilizations. Too much blood was poured on Mesopotamian soil. Christians have become too distrustful of Kurds who did not defend them in 2014, and too wary of Muslims who did not always condemn the advent of ISIS.

"An international protection will be necessary so that our youth will no longer choose emigration," said Moshe.

Will Qaraqosh need intervention like the Balkans after the 1990s wars where the United Nations was deployed? Perhaps it will be necessary to have land divided into autonomous regions for religions and ethnicities like Sunni, Shia, Kurdish and Christianity. Would it be the start of "Christianistan"? For now, at least, the priority is to reconstruct religious symbols and places of worship that were destroyed.

The armored vehicles of the Iraqi army crossed the city to go to the frontline about 15 kilometers away. The battle was in full swing in Mosul. Some 5,000 Islamist fighters were taking refuge behind the human shield of millions of civilians still present.

Kado, a captain at the Protective Units of Nineveh (NPU), an armed Christian group financed by the U.S. and integrated into the Iraqi army, and that's deployed exclusively in Christian villages, leads a batch of fighters on to the roof of the Saint John church in Qaraqosh. The city is desolate, pounded here and there by the coalition, plundered by the Islamists, burned by the fighters.

"Our civilization has built all this from nothing. We will be able to recover from the ruins," said Kado. A soldier, perched on top of the bell tower of Saint Jean, tinkered with the yoke of the bell and tied an electric cable. An NPU recruit seized it, and sounded it. The men relaxed, drunk with joy, proud to beat bells that were silent for two years in the plains of Nineveh. Soldiers fired Kalashnikovs into the sky to celebrate. 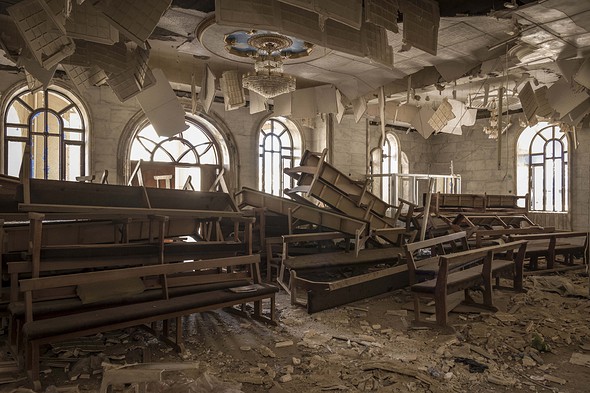 These Christian units have prevented looting but have not fought on the front lines against ISIS jihadists in Mosul. Their forces are too weak to do so. But in Qaraqosh, they helped liberate Saint Paul church, which jihadists had turned into a mosque.

"I had the idea to create these militias the night of the arrival of ISIS. The peshmerga was fleeing. The Islamists were at the gates. Our children wandered in the night. I had to do something," he said.

In two years of efforts, Abbouch gathered and trained 500 men. Their equipment was brand new, their weaponry light. Some American volunteers came to supervise their training.

"Some believe me to be the enemy of Muslims. It's a mistake. I have nothing against individuals nor against their faith, but I have carefully read the Koran in Arabic and there I have found the exact justification of the acts that were committed here," he said. The general is not unlike Italian writer Gabriele D'Annunzio — the martial dream, the dry nervousness. A few armed men escorted him.

Abbouch walked the devastated streets to reach his burned house. All the rooms had been looted. "Here, my daughters room," he said in front of a charred room. He picked up a picture of his mother from the rubble that hadn't been seen by jihadists.

Not far from the general's house, two old women who weren't able to flee spent the two years of occupation locked up in their rooms. Their old age protected them from sexual slavery. ISIS jihadists kept the two Christian women alive after making them spit on the cross.

"We can only bring our families back here once the entire area is cleared and secured," said Abbouch.

How will world powers agree on what to do when ISIS is overcome? For now, ISIS being a common enemy has inspired a sacred union between countries.

U.S. President Barack Obama wants to free Mosul before he vacates office to score a military victory. Russian President Vladimir Putin wants to defend his strategic and economic interests, and his historic links to Syria. Turkey, not invited to the battle of Mosul, is attacking Syrian Kurds and continues its ambiguous game with ISIS. The national government of Iraq, worried about the prospect of the country being partitioned into autonomous provinces, wants to show the world that the Iraqi army is no longer riddled with corruption. Iraqi Kurds want to strengthen themselves and push their advantage toward Kirkuk and, perhaps, toward independence.

What about Christians? What will they reap from the fall of Mosul? There were a million Christians here a decade ago. Today, there are no more than 300,000 in Iraq. They have prayed for 2 millennia in Mesopotamia. History is ironic. Islam, the last of the monotheistic revelations that appeared in this part of the world, is now the only one that's ruling in this part of Earth.

Christians in the Middle East turn their gaze toward Europe and ask why we are so indifferent to our heritage. Are we only concerned about it when it's threatened by extinction?

MOSUL — Ziyad loaded his wife and three children in the big German sedan that used to serve ...

The Shammar, The Tribe Fighting ISIS On The Front Lines