There must be an infinity of good stories to tell about the bus from Jerusalem to Ramallah. At its starting point, the streets are well kept, like in a first-world country, and the white stone buildings standardized. At sunset, they give the Israeli city a golden yellow hue. When you reach Ramallah, the dusty streets are marred with holes, the miscellaneous buildings and narrow pavements force pedestrians to compete for space with the cars. One glance and you know you've left Israel behind. This is Palestine, and it's scary to see how everything can change in just a 40-minute bus ride.

Mohammad is waiting for me at the main bus station at 5 p.m., as planned. I first met him online, via couchsurfing.com, a few hours ago. When I found out the platform was also active in Palestine, I decided it would be the best way for me to discover the country.

Mohammad turns out to be an effusive man, with almost Latino gestures. His black, deep eyes give him a serious, rigid appearance that doesn't match his body language or his 1.65-meter (5 ft 5 in) height. He prefers to talk about himself than to ask me questions. And yet he has an unquenchable thirst for knowledge about the world.

Like most Palestinians, he's not allowed to leave the country. So instead of going to other places, he brings other places to him. Sitting in a café on al-Manara Square, the city's most buzzing plaza, my host tells me about the people he's welcomed, a twinkle in his eyes as he lists out the nationalities of these past visitors with the same exhilaration as someone talking about a trip to Paris. 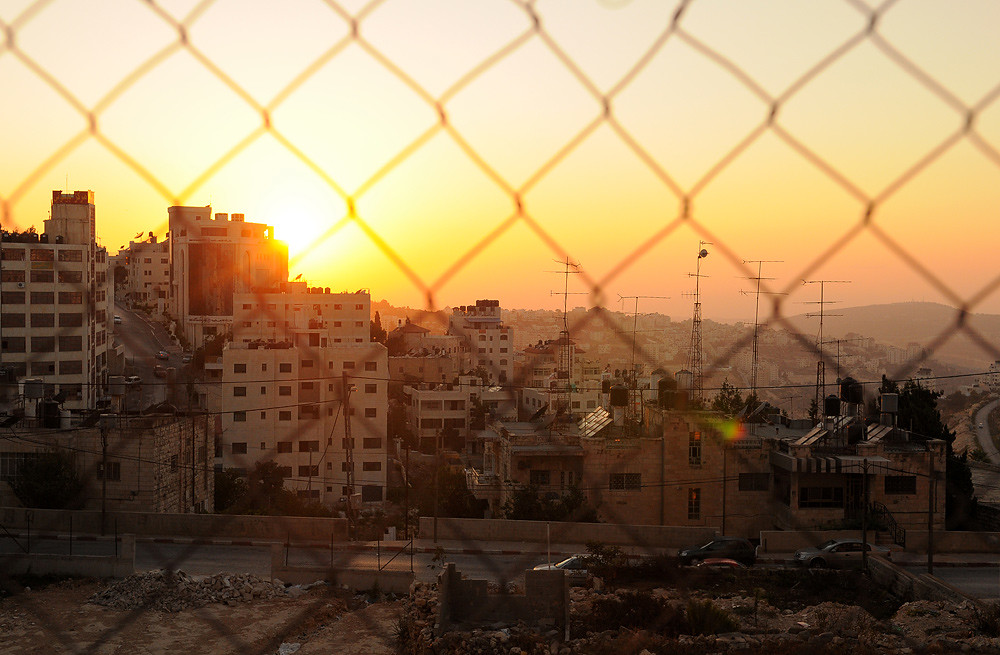 After our first tea, Mohammad tells me he won't, in fact, be able to put me up. His wife didn't agree with my staying. The presence of a male stranger means she'd have to wear a full veil inside her home: not a very good idea in the Middle Eastern summer. Temperatures recently topped 100°F (38°C) and the lack of rain doesn't help. Instead, he suggests I stay with his brother-in-law, Maan, who lives just outside the city. I agree.

Maan joins us in the café and takes me to his home. The sun is already setting when we reach our destination. Maan's street is in a good state. You can see Ramallah's mountainous terrain from here. It reminds me of Teresópolis, the town I grew up in, back in Brazil.

Maan lives alone in less than 20 square meters, in the basement of a modest building. The squat toilet and shower from which almost no water comes out are separated from the main room by the flat's one and only wall. The only window is covered by an improvised beige curtain. On a chair, an ancient fan without a protection grid takes care of providing scarce fresh air. Three of us are going to sleep here tonight: Maan and I, plus Samuel, who arrived today from New York.

Our host doesn't speak any English, which means communication between us and him is, at first, almost nonexistent. Maan is a taxi driver and looks rather stressed out most of the time because of the traffic, so the best course seems for me to stay quiet during our journey.

But as soon as we're out of the city, of its never-ending horn toots and risky overtakings, he turns into an entirely different person. He turns up the volume to the max as Taylor Swift starts playing and he blurts out all the English words he knows in one go: welcome, nice, shit, fuck. 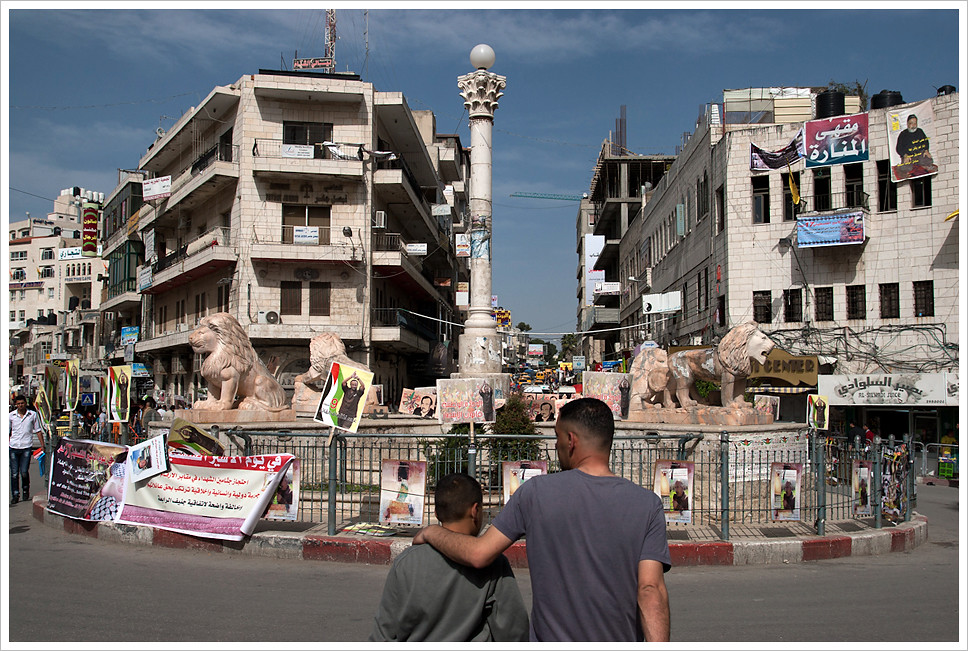 Maan is different from his brother-in-law Mohammad. He doesn't care about religion and has as Western a lifestyle as it's possible to have in this part of the world. In his car, the pirate CDs include all of the current U.S. hits. In a corner of his flat, he keeps a dozen pairs of sneakers. He also has a girlfriend. And he's not a virgin anymore, he explains in a conversation made of gestures and nonsense translations, courtesy of Google. He looks to be around 30 but he seems to see life through the eyes of a prepubescent boy.

Samuel, the New Yorker, sleeps on the room's only bed while Maan and I sleep on the floor. It's almost the crack of dawn when my host hugs me and rests his head on my shoulder for a few minutes.

These days, Ramallah acts as the virtual (or "temporary," as they prefer to call it) capital of the Palestinian state, and on top of being home to the offices of the Palestinian authority, the city is a bit more secular than the rest of the territory. With its bars and intense flow of people, Ramallah is nicknamed the "Palestinian Tel Aviv," a comparison that's completely disconnected from the reality.

The vast majority (90%) of Palestinians are Muslim. This means in practice that even the most modern city in the country still clashes with many religious dogmas. As we take a stroll through the streets at night, Mohammad tells me that women who wear tight clothes "mustn't be taken seriously," even if they use a veil to cover their heads.

"The right thing to do is to wear the full veil, with loose clothes, so men can't see the shapes of their bodies." When I ask him about Koranic rules regarding male clothing, he tells me that "we also have rules, for example not wearing shorts above the kneecap."

Mohammad doesn't drink any alcohol but he says he doesn't have any problems with foreigners who do. Still, when I buy a small bottle of whiskey and another of white wine for a dinner with eight people, he asks me whether I'm not overdoing it a bit. Similarly, when I pour myself a second glass of wine, he starts wondering ironically whether more guests have just arrived. And the next day, I would wake up with a message saying he's worried about the quantity of alcohol he saw in the house the previous night.

But the dinner isn't taking place at his. Our host is Ehab, a friend of Maan's who lives above him. Mohammad used to be Ehab's friend too until he found out that Ehab drank alcohol. Now, for that reason, he calls him a traitor.

The atmosphere during dinner is tense, with heated arguments in Arabic, until Mohammad leaves. Before he does, he adds me on Facebook. It suddenly hits me that my profile shows plenty of messages and pictures that expose my homosexuality. So I quickly send my password to a friend of mine in Brazil and ask her to change or hide any such post. I don't want Mohammad to see that.

Alex Correa is a travel writer and journalist from São Paulo, Brazil.

This is Worldcrunch's international collection of essays, both original pieces written in English and others translated from the world's best writers in any language. The name for this collection, Rue Amelot, is a nod to the humble address in eastern Paris we call home. Send ideas and suggestions at info@worldcrunch.com.

Couchsurfing In Palestine, Part 3: Death At The Door

This is the third and final installment of a three-part series "Couchsurfing In Palestine." Read ...

Couchsurfing In Palestine, Part 2: Where Are You From?

This is the second installment of a three-part series "Couchsurfing (And Keeping Secrets) In Palestine." ...