The 45th U.S. president took office by discarding the postwar precedent of values-based U.S. leadership of and engagement with the rest of the world.

WASHINGTON — For anyone who hoped that President Donald Trump would use his inaugural address to lower America's political temperature, or expected that the rancor of 2016 would give way to elevated expressions more typical of, and appropriate to, an Inauguration Day, the new president's remarks Friday can only be described as a sharp disappointment.

Like his alarmist speech to the Republican National Convention in July, this one painted a false picture of an impoverished, crime-ridden country that has been cheated and victimized by Washington elites and grasping interests abroad. Trump's dystopia may exist in places but not generally in a nation whose economy has rebounded from the 2008-2009 recession and is now outperforming other advanced industrial democracies. Stoking discontent may serve Trump's political interests, but seems unlikely to contribute to the country's stability or unity of purpose. Nor will painting these purportedly unchecked ills as imposed on the "righteous public" by a vaguely disloyal "small groupin our nation's capital" - the same people, presumably, who had honored him, and the country's democratic heritage, by their presence on the inaugural platform. If such words are capable of unifying Americans, it will only be in a shared sense of free-floating grievance against a scapegoat, or scapegoats, designated by Trump.

Some heard in this an echo of Jacksonian populism. And, to be sure, there is a rich American tradition of attacking establishment fatcats and promising reform. But there's a world of difference between decrying dysfunction and insinuating disloyalty. Even Andrew Jackson might have blanched at the grandiosity with which Trump invoked America's "glorious destiny," or his repeated promises to abolish the tedium of democratic deliberation - "talk" as Trump dismissed it - through "action." Old Hickory's 1829 first inaugural address humbly included a pledge to "keep steadily in view the limitations as well as the extent of the Executive power, trusting thereby to discharge the functions of my office without transcending its authority." Trump, by contrast, spoke in oddly mystical terms of "a nation that is only living as long as it is striving." 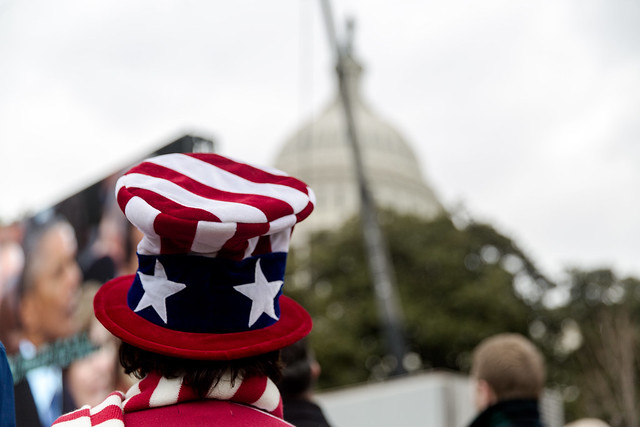 A Trump supporter at the inauguration Friday — Photo: Lorie Shaull

In fact the Constitution — which Trump never again mentioned after swearing his oath — was ordained for purposes simultaneously less ethereal and more uplifting, such as to "establish justice" and to "secure the blessings of liberty." Yet "liberty," "justice" and even "peace," language common to past presidents' inaugural rhetoric, did not make the cut in Trump's speech. Nor did "equality," though we heard about "carnage," "ripped"away wealth, "stolen" lives and the "destroying"of jobs. And we heard Trump repeatedly offer that Americans would be "protected" against these transgressions and betrayals - "I will fight for you," he promised. Simultaneously personalistic, paternalistic and state-aggrandizing, these formulations were hard to square with his claim that, as of noon Friday, "the people became the rulers of this nation again."

This magical-mystical union of the people with one another (Trump gave "solidarity" its debut in a presidential inaugural address), and of the people with their president, will take place, we were told, under the banner of "America first." Since World War II, American political leaders have been loath to invoke that slogan, due to its association with a long-discredited prewar committee that preached American neutrality toward the rise of fascism in Europe. Trump now embraces it.

In so doing, he repudiated the postwar precedent of values-based U.S. leadership of and engagement with the rest of the world. The United States over the decades has done well by doing good; American generosity, and its support for fair global rules, fostered prosperity in Europe and Asia and beyond, which in turn redounded to the United States' advantage at home. Announcing falsely that "protection will lead to great prosperity and strength," Trump derided engagement and interdependence as suckers' games, elevated "winning" as the only goal and endorsed the zero-sum notion that all nations "put their own interests first." It made for a dark vision indeed - the opposite, if such can be imagined, of Abraham Lincoln's inaugural appeal to "the better angels of our nature."