Glimpse Of A Gifted Refugee's Life In A German High School

INGOLSTADT — Math is the first class of the day. Only two students, who are clearly aces at math, are raising their hands to answer the teacher's questions. Almost everyone else is dozing off. But Mahmoud, who is seated in the first row, appears to be wide awake. He does not, however, raise his hand. It's not that the math being taught is too difficult for him. It's just that the 17-year-old is shy. He's also struggling with the German language and Bavarian accent of the teacher.

Mahmoud's mere presence here in a German school is an experiment. He does not stick out with his cool horn-rimmed glasses and trendy haircut — the sides cropped short, the top long. And yet, he is different from all the others. Mahmoud is an unaccompanied minor refugee from the Kurdish region of Syria. He is one of about 70,000 refugees under the age of 18 who fled to Germany without a parent in 2015. And this country is supposed to provide him with an education.

The education level of incoming refugees is often a topic of hot debate. Officials, like the general population in Germany, are torn between a culture of hospitality and skepticism toward refugees. Some claim that refugees are generally illiterate, only shepherds, people who cannot be taught. Others talk about refugees like they are all heart surgeons and their offspring are extraordinarily intelligent. Neither portrayal is accurate.

Integration doesn't work by itself. It never has. You only have to look at how much the third generation of some migrant groups are lagging behind to understand this. There is no easy way "through" our educational system even for skilled refugees like Mahmoud.

Mahmoud was a good student in Syria. His parents believed in the importance of education. Mahmoud's father died when Mahmoud was young but the family was financially stable because they owned a patch of land and received income from renting out the property.

German authorities try to take special care of unaccompanied minors. They are not placed in typical refugee homes. Mahmoud stays at a facility run by the Roland Berger Foundation in Ingolstadt, a southern German city that's also home to the Audi car company. The facility has social workers, lecturers and mentors who tailor strategies for each refugee to ensure their wellbeing and to help them prepare for the future.

Like most refugees of school age, Mahmoud went to a preparation class when he first arrived in Germany. That was when his main caregiver noticed how gifted Mahmoud was, particularly in math and physics. "That's when I thought Mahmoud should be at school," says the social worker.

"(Math) formulae are the same in every country," says Mahmoud simply.

So while he tackles equations and sonnets, others in the same house take part in classes that are supposed to prepare them for the working world. The official report on Mahmoud's abilities, which was compiled after his arrival in Germany, reads like a school report: "Mahmoud went to school continuously since the age of six and is able to read and write in his native Arabic tongue. He was familiar with the Latin alphabet when he arrived in Germany. His English is very good and he has very good general knowledge and a quick mind."

Knock at the door

Mahmoud's room demonstrates the clash of cultures he experiences. You will find a photo of German footballer Mario Götze and a Syrian flag right above his bed.

Mahmoud's hometown is situated in the northeast corner of Syria which meets Turkey and Iraq. It is at the heart of the conflict as it's prized by Kurdish people, rebels and Syrian troops. It's also eyed by ISIS militants, who managed to get as close as 20 kilometers to his city's border.

"Everyone is fighting everyone else," says Mahmoud. The peaceful city of his childhood suddenly became a different place, where grenades were tossed up to the family's balcony and the military knocked on their front door to force Mahmoud to join the fight. "I was a student. Being a student was my job, not killing people. I could never do that," he says.

His mother urged him and his brother to flee — "If you stay here, you'll die," she told them. The brothers traveled for six months. First through Turkey, then by boat to Greece after turning to smugglers for help. Mahmoud does not like to speak of those six months and grows more quiet than usual. The official report only says that the police found him near Munich in 2015. He was registered as an illegally traveling unaccompanied minor so the child services agency had to care for him. 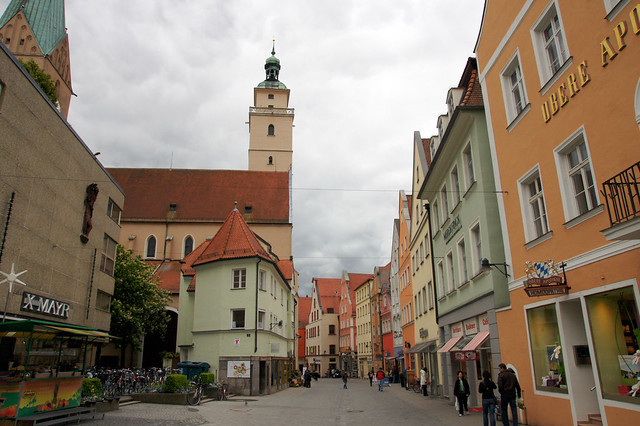 But what now? Study? Work? It is not the trauma caused by his escape that weighs Mahmoud down but constant worry for the wellbeing of his mother and sister. And his guilty conscience. The law allowing families to join unaccompanied minors who had arrived in Germany was torn down when the mood toward refugees turned sour.

Mahmoud knows how lucky he is to be here. But he also knows that his family could be dead tomorrow. Reading news everyday online about Syria does not help. There are days when he uses his full German vocabulary and smiles. And then there are days when he feels gloomy and is curt, looking lost on the gigantic couch in the recreation room as he tries to make himself smaller than he is. Everyone notices his glum moods — social workers, fellow students at school, teachers as well as his headmaster, Vitus Lehenmeier.

Lehenmeier made Mahmoud a "management priority" and gives him private tutoring in his office after school. "I am allowed to talk about anything I don't understand," says Mahmoud about his private lessons. But Lehenmeier makes it clear that Mahmoud is not receiving special treatment.

"We don't want to give the impression that any one person is being favored above others. It also isn't clear that Mahmoud will be able to get his high school diploma. We are giving him a chance but it is entirely up to him to make the best of it. He has to work within the system and we, as a school, want him to do well within the system," says Lehenmeier.

Mahmoud will have to take an exam during the summer holidays to demonstrate what he has learned throughout the year. If he passes the exam, he will be allowed to continue on to grade 11. If he fails, he will repeat grade 10 for another year under exactly the same circumstances as other students.

Mahmoud is confident that everything will go well and that he will continue to advance from one grade to the next until he gets his high school diploma and is off to university. Lehenmeier is more cautious and speaks of "great leaps forward if you compare the first and second semester."

Lehenmeier believes that the exam Mahmoud faces should be up to standard: "It will not do him any favor if he is simply allowed to continue on to the next grade, no matter what." Either way, the road ahead is as long as it is unpredictable — both for Mahmoud and for Germany.