China In Doubt, Contradictions Of A Nation On The Defensive

In Beijing, all in one place. - Tpg via ZUMA

Faced with enormous challenges both at home and abroad, China reveals itself as a land of double standards and growing uncertainty.

BEIJING — French President François Hollande went to China last week, arriving just after German Chancellor Angela Merkel had left. In the past few weeks, the Chinese president also met with President Barack Obama in the United States and was received with great pomp by the United Kingdom.

No matter how much noise Vladimir Putin makes, it's China, not Russia, that the international community is wooing. Beijing no doubts appreciates this added legitimacy as the Chinese economy slows, and doubts grow, for the first time in memory.

Chinese power can control the climate (by closing factories around Beijing). It can control demographics by permitting two children per couple. The mandatory one-child limit was "a gift from China to humanity," a high-ranking Chinese official told me privately two weeks ago in Beijing. Without this, the population of China would have been close to 2 billion!

But China's Communist Party has so far failed to find an answer to another, much more serious problem. How does it keep its power intact when everything, inside and outside of China, is changing?

Visiting Beijing, it seemed to me that the world trusted China more than China trusted itself. The 2008 Olympic Games were perhaps the high point of Chinese self-confidence. Since then, the convergence of economic crisis and slowing growth, on the one hand, and the personalization of power behind President Xi Jinping on the other, have created a whole new atmosphere. Chinese officials seem to be taking positions that are more defensive, making the country's contradictions more visible.

On an international level, how can China preach a democratization that itself refuses with such virulence? How can it wrap itself in respect for international law, talk about standards like a model of virtue, when it shows great understanding towards Russia's faits accomplis in Crimea? You can't build trust when you demonstrate so deep a divide between words and deeds.

How, finally, does China conciliate a discreet role in the world, particularly in the Middle East, while being so active in the South China Sea? It's true that China no longer rules out an intervention in Syria, but officials have said it would only act under very specific conditions: that is, if the Syrian government asks, and if there is a United Nations mandate.

Why does China continue hiding behind great philosophical principals while it behaves with as cynically as any other country? 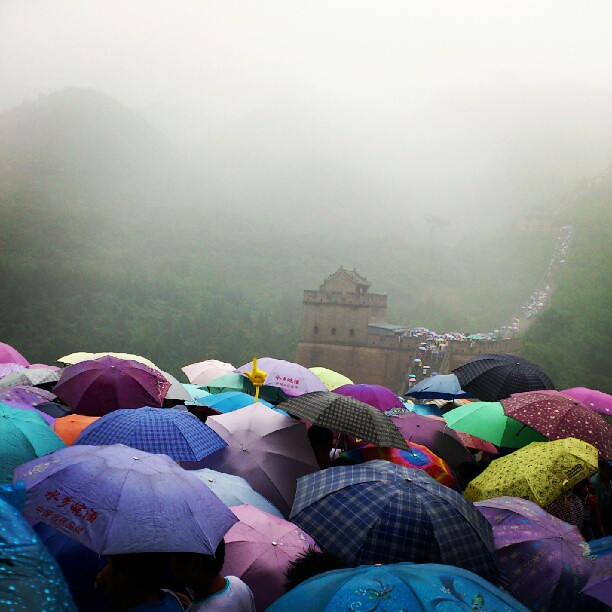 The Great Wall in the rain. Photo: Luis LuCheng

While participating in a debate about world order in Beijing, Merkel was surprised to see her Chinese interlocutors concentrate on cybersecurity and not on the refugee crisis. After playing the commerce and finance card with the British, the Chinese played the resentment card with Germany. When Merkel mentioned Putin, they answered by talking about the American wiretapping of her cell phone.

It seems that the less self-confident China is, the tougher it becomes with other countries.

It's true that the country's domestic challenges are huge. How do you handle a country that now has more billionaires that the U.S. and almost as much poverty as India? How do you both forcefully encourage individualism on an economic level and completely reject it on a political level? While the heart of Beijing has become a gigantic luxury shopping center — like a more modern version of Tokyo — the Great Hall of the People, the headquarters of political power, seems frozen in time.

And what about the respect for authority, which seems to reflect a kind of schizophrenia on the streets of Beijing. The men in green police uniforms and white gloves are everywhere, but no one seems to follow the traffic rules — pedestrians or drivers.

Double standards and paradoxes abound in Beijing. The rhetoric of the most conventional regime supporters has become tougher, while those inside the system are more open, gently expressing doubt about the new nature of power.

But China's strength is the Chinese, despite the existential contradictions of the country's regime. Their energy, their very American cult of excellency in both study and work are more present than ever. The question is, will that be enough?

No one can predict China's future. A few years ago, I wrote that the country looked to be taking small steps in the right direction. I cannot say that today. What remains to be seen is if China is taking small or big steps in the wrong direction, or just walking in place.

First with Obama and now with Trump, the U.S. is making space for a second imperialist power on the American continent, China.

-Analysis- PARIS — For more than 70 years, the United States was the ultimate life insurance policy for Europe against the Soviet and now Russian thirst for power. The U.S. also held sway ...