DAMASCUS – Now in its sixth year, the war in Syria has torn through the country's cities, sects and social fabric. For families like Um Mahmoud's, Syria's frontlines have even invaded their homes. The mother has seen her three sons join opposing sides of the war and has been unable to stop them from turning on each other.

Her story is just one example of how the war has torn families apart for countless reasons. Some families have been divided by ideological differences and political affiliations. Other families have fled the country and been scattered across borders.

Um Mahmoud blames herself for the bad blood between her sons, she told Syria Deeply from her home in Damascus. Before the war, 35-year-old Mahmoud worked as a plumber, 32-year-old Kamel worked at a car-rental shop and 23-year-old Hadi had just graduated from business school. Um Mahmoud encouraged her sons to join the popular demonstrations against the government of Syrian president Bashar al-Assad in 2011.

"I still remember how I woke them up every day to join the demonstrations," she said.

In the early months of the civil uprising in Syria, the largely peaceful protests were quickly met with a brutal crackdown from the government, which gradually gave way to the emergence of an armed opposition fighting against Assad's regime.

Even then, Um Mahmoud continued to support her eldest and youngest sons, Mahmoud and Hadi, when they decided to join the armed opposition in November 2013. As the armed opposition began to take control of territory on the outskirts of Damascus, Mahmoud and Hadi joined the ranks of the Free Syrian Army (FSA) fighting the Syrian government in the capital's suburban al-Qaboun neighborhood. There, they fought side-by-side, and they later moved to the fight in Jobar neighborhood.

Soon after, increasing sectarianism and the emergence of more hardline factions saw a splintering of rebel groups under the banner of the FSA. These more extreme groups – most notably the group now known as the so-called Islamic State (ISIS) – began fighting more moderate factions. Taking advantage of the power vacuum left by opposition infighting, ISIS militants were able to advance in the Damascus suburbs.

Um Mahmoud realized the situation was spiraling out of control and begged her sons to put down their weapons, even offering them money to leave the country. They refused. Hadi continued to fight alongside the rebels, and Mahmoud joined a faction affiliated with ISIS in the Damascus suburb of Tishrin.

"There was intense fighting between the two groups," the mother said. "I prayed every night that they would not face each other on the battlefield."

The two brothers never wound up fighting each other. Yet, Mahmoud was eventually killed in June 2015, during clashes between the rebels and ISIS. His brother Hadi had not participated in fighting that day. 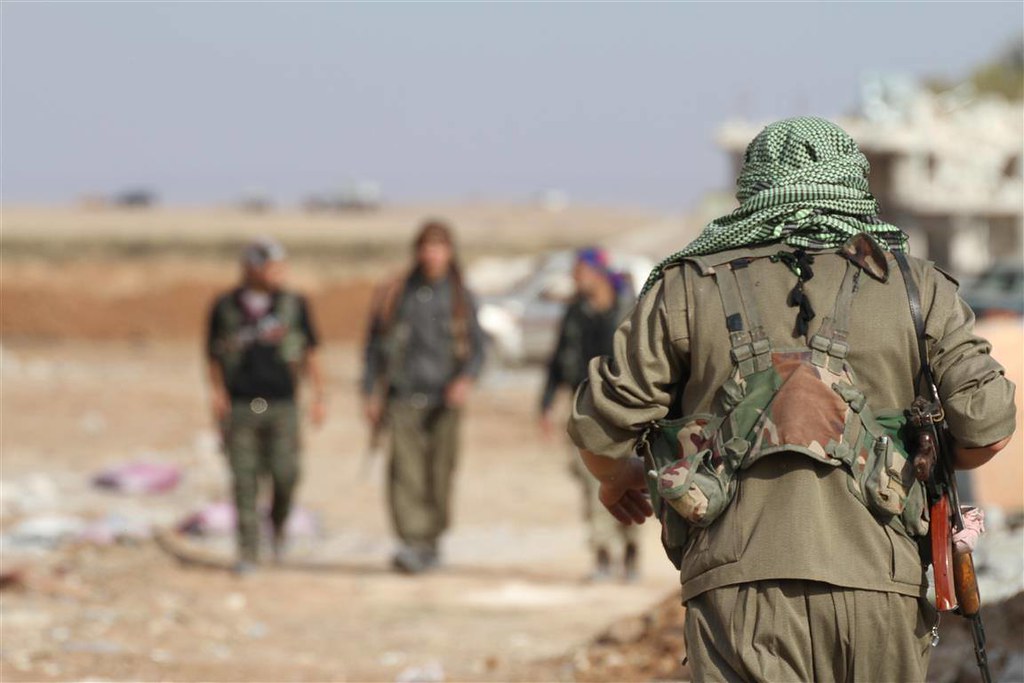 "We both joined to fight for the same goal," said Hadi. "I tried many times to stop him from joining the Islamic State, but he never listened to me."

While both his brothers were battling pro-government forces and each other, Um Mahmoud's middle and married son, Kamel, had refrained from taking up arms, though he had sided quietly with the opposition in the beginning of the conflict. In January 2015, however, he was arrested at a government checkpoint, and detained for seven months at the notorious air-force intelligence security branch.

Throughout this period, Um Mahmoud lost contact with Kamel, unsure of where he was being held. The family later learned that he was released from prison, but had been forced to join the government's military reserve service.

Hadi, who was still fighting alongside the rebels, did not have direct communication with his brother for some time. Until one day, despite his fears that the government had tapped the rebels' lines of communication, Hadi attempted to contact his faction's operations room over the radio. On the other end, he heard "a voice that I knew so well. It was my brother's," Hadi said. "It felt like he wanted to talk to me in particular."

But when the voice spoke and threatened him, Hadi realized his brother was no longer the same man he had known. "He ordered me to surrender … as if he was brainwashed. It felt like the person on the other side of the call was not my brother. When he threatened to kill me, I got really angry and I threatened to kill him, too."

Government and rebel forces have since reached a truce in al-Qaboun where Hadi and Kamel are stationed, but the two brothers still do not speak. The divides created by the war are so deep that even when the bullets stop, many shattered families will probably not be able to put the pieces back together, and their loved ones may never be reunited. Though Um Mahmoud has already lost one son, she still holds on to hope that the love of a mother is enough to bring what remains of her family back together.

"Mahmoud, Kamel, and Hadi are my beloved children. Since the day their father died, I've been everything they had," she said. "I love each one of them no matter what side they are on."

My Kids, Koran And Badminton Racket, Baggage Of A Syrian Refugee

This is part of a Syria Deeply series "Bags and Belongings," in which we ask refugees what they ...