From The Great War To Gaza, Evolution Of The War Correspondent

A century ago, those reporting on wars were little more than military puppets. Since Vietnam, journalism is freer and more complicated. Now social media is changing the equation again.

TURIN — For those “covering” the Great War, patriotic duty always prevailed over truth, with journalists expected to be as obedient as soldiers.

Who could imagine Marie Colvin, The Sunday Times reporter killed in 2012 covering Syria's siege of Homs, never moving freely amid the action. Or Martin Adler, the late award-winning war correspondent, and Robert Fisk, The Independent's Middle East correspondent, never stepping foot on a battlefield? Can you imagine them dressed in fatigues with a required soldier chaperone, following military orders about what to write?

Aug. 4 marked the centenary of Britain’s invasion of Belgium, which was the real beginning of World War I. According to Philip Knightley, author of the book The First Casualty, it wasn't just the Great War but also a “great conspiracy.” He details degrees of government manipulation and media complicity, as evidenced by the “embedding” of reporters in military units and the uncritical, openly patriotic coverage of conflicts.

It would be a decade after the end of World War I when journalism could begin to reflect on the true dimensions of this tragedy that had been manipulated so shamefully. “No period in the history of journalism has been as dishonorable as the four years of the Great War,” British politician Arthur Ponsonby wrote in 1928.

Emilio Lussu, an Italian soldier and writer who fought in the trenches of the eastern front, gave his memorable account in A Year on the High Plateau. In it, he severely condemned the journalists there, likening them more to poets than journalists. “They described a hundred battles without even seeing one,” he wrote.

One hundred years ago, the world was undergoing a profound transformation that gave way to a new modern era. Mass society was forming, and a general consensus became the essential objective of political systems. Joseph Pulitzer had just written that “well-informed public opinion is the supreme court of any society,” and the conflict involved millions of citizens across Europe.

There was a crisis of social equilibrium — even in the most insignificant daily events — and government-controlled information seemed necessary to keep the public on their side. This wasn’t just in terms of functional construction of knowledge, but surveillance and censorship too.

Wherever they were, war correspondents were shown among the armed forces, dressed in uniform but without insignia. Even if they had the rank of captain, they were followed by both a liaison officer, who controlled their work, and a soldier paid for by the newspapers.

The Italian government required war reporters to be over the age of 40, with no criminal record and some military experience. They lived out their days almost always at the back. The rare “trips to the front” were organized by a liaison officer, to whom all stories were sent before being filed to the papers.

There were examples of professionalism, but the reporters had no autonomy. Only a few — especially some Americans— preferred to go back to their editorial offices rather than be extra puppets marching to someone else’s tune. 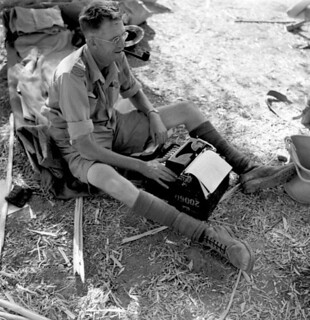 Patriotism was the most important consideration. It was essential that the correspondents were truly faithful to their homeland. In what was a very vertical society, with very little mobility between classes, nationalism defined belonging — whatever the form of government. The fate of their country was the single most important duty. They were obliged to be silent when troops were withdrawn (for “strategic repositioning”) and to echo triumphalism after any military action (with “heroes” stifling any faults that the general might have made).

After World War I came the Russian Revolution, then the Spanish Civil War, until finally the obligation of patriotic duty lessened. It was only in Vietnam when networks sent portable cameras and correspondents that war finally became a narrative in which front-line journalism found freedom.

A lost century had passed since 1854, when one of the first war correspondents, Sir William Howard Russell, told the story of the Crimean War faithfully in its utter brutality. After backlash from the public, the British government put a gag on reporters who went to war.

Today, reporters can move more or less freely on the front lines. They don’t have uniforms to wear nor officers to follow them around anymore. They rely on their own experience, knowledge of the fighting forces, and luck. But this freedom, enhanced by Twitter, Instagram and other networks that enable them to have a constant connection to publish what’s happening at that very moment, also brings high risk.

In recent years, more than 1,500 war correspondents have been killed. Journalists are no longer considered neutral observers. They are also part of the conflict, or considered as such by the armies and militias who fight because they know well that their stories and articles determine a knowledge of “reality” that is utterly out of their control.

Now, technology determines the nature of the story like never before. Images and clips flow from YouTube and other media sources, changing the correspondent’s traditional role. It’s no longer a question of wearing a military uniform anymore.

Professsional war reporters risk being overwhelmed by the 21st century, and yet their survival is the survival of journalism itself.

NGOs May Be Endangering The Very Migrants They Seek To Rescue

-Analysis- More than 4,500 people lost their lives off the Libyan coast last year. And yet, there have never been so many vessels carrying out rescue missions in the area — from Italian ...

From Rafts To Riches, Refugees In Italy Dream Of Soccer Stardom

ORISTANO — Club scouts and retired players from across Italy have come to this town on the Italian island of Sardinia to find new soccer talent among recently arrived African migrants. They ...