At the Semipalatinsk nuclear test site, aka the Polygon - Ben Dalton

Hundreds of atomic bombs were detonated at the Semipalatinsk nuclear test site in eastern Kazakhstan during the Soviet regime. Scientists are now conducting research on the site, which was shuttered 25 years ago, to evaluate how radiation affected the reg

THE POLYGON — At first, it's hard to tell where the Semipalatinsk nuclear test site begins as the scorched steppe stretches to the horizon. But turning onto a dusty road signals that we've reached the site, also known as the Polygon. Fallen telegraph poles lie on yellowed grass. You can see broken pillars and bridges torn in half. Concrete pillars mark the borders of the Polygon, which at 18,500 square kilometers is more than half the size of Belgium.

Inside the Polygon, strange four-story constructions, called gusaki, or "geese", loom like dark giants. They do resemble colossal birds, with their long, charred necks stretched toward the sky. They were built in the 1950s to house nuclear equipment and armored long-range cameras that were capable of filming explosions at seven frames per second.

These "geese" buildings, with scorched walls, tumbleweed and narrow arrow slits, look onto the explosion site. Small, shiny pearl-like rocks that appear transparent in the sun lie on the short, stiff grass that surrounds these structures. These rocks are called kharitonchiki, after Yulii Khariton, the chief designer of the Soviet atomic bomb, even if no one really knows what these rocks consist of. Scientists believe they could have formed during the explosions when quartz settled on plutonium, smelted, and later fell to the ground as black droplets.

"It's best not to gather souvenirs, they're radioactive," says Andrey Panitsky, head of the ecosystems department at the Institute of Radiation Safety and Ecology.

To study the effects of a nuclear explosion, extensive infrastructure had been built around the bombs: houses, military tanks, planes, ships. There's even a metro station underground. Sheep and dogs used to be tethered while the bombs were tested. At the Polygon museum, you can see the flattened brown organs of these animals preserved in formaldehyde next to information stands about ruptures and bleeding. You can even press the very button that launched the first bombs. A phone next to the command post at the Polygon has a direct line to the Kremlin. 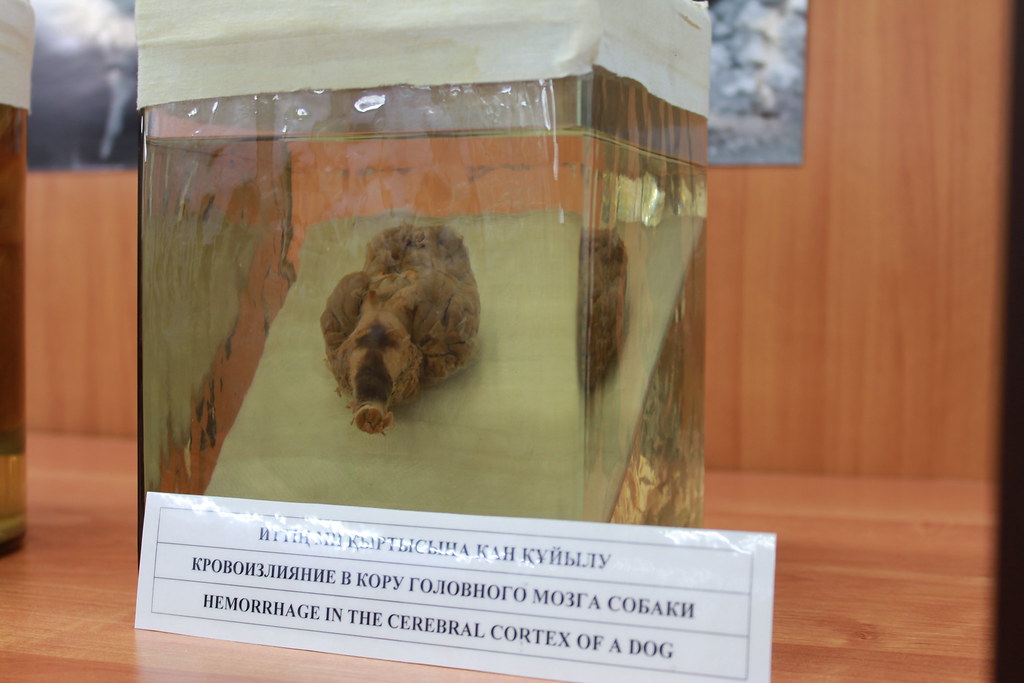 Dog's brain in formaldehyde on display at the Polygon museum — Photo: Ben Dalton

Petrovich, my driver, races through the former test site to the epicenter of the blasts. The soldier accompanying us hands out masks and tells us to wear three pairs of shoe covers. "They tear quickly," he explains, "and we don't have anything else."

"Actually, it's not dangerous to be here … the main thing is not to inhale radioactive dust and not to transport it on clothing," says Panitsky.

As soon as we pass the "forbidden zone" signs, the radiation dosimeter starts rapidly beeping and flashing "danger". Numbers shoot across the monitor: 100, 200, 300, 700, 800. The safety limit is 30. Nearby, we see a small muddy pond that was the site of the first Soviet atomic bomb explosion.

Petrovich, in flip-flops and no mask, leans on the bus and lights a cigarette.

"I've seen this radiation," he answers, while digging his toes into the dust. "I've lived here my entire life, 66 years." For the last 20 of those years, Petrovich worked as a driver at the Polygon.

"As boys we eagerly awaited these explosions. A car would drive by, and a loudspeaker warned everyone not to leave the house and to cover the windows with pillows, and we all ran to our secret lookout places. I climbed onto the roof of a shed, covered myself with old clothes and watched the mushroom. It was beautiful. Very beautiful. And at the top, most importantly, it spins, spins. Why does it spin? I don't know. Then you wait for the wave." He closes his eyes and takes a deep breath, smiling.

The blast waves were warm, suffocating, and strong. Some of the clay and brick houses collapsed. The military later rebuilt them from stone in order to be sturdier. People learned to adapt. They would watch the blast destroy a house they built and would wait for the military to rebuild them a new home. Windows were frequently shattered and were replaced as well.

"When the underground explosions began it was just as interesting. Just like drinking vodka. The earth moves in waves. Like water. The further away from the blast, the bigger the waves," says Petrovich.

The Polygon is home to an atomic lake. In 1965, an underground explosion at the confluence of two major rivers, Chagan and Aschisu, created a crater 100 meters deep with a diameter of 400 meters. The objective of the blast was to test whether it was possible to create artificial water reservoirs with nuclear weapons. The water in the atomic lake is clear, with algae deep below.

"The water is not contaminated … but the shore is. The important thing is not to sunbathe on the beach, but we can still swim. You get up on a rock, one that you know is clean, carefully undress and swim," says Andrey Panitsky. The lake used to be full of fish. Although the chemical strontium began to gather in the bones of the fish as a result of the tests, the flesh remained edible and the lake was overfished by Polygon employees.

It is still unclear as to how many people were affected by nuclear testing at the site. The classified statistics, kept by the Soviets, disappeared in the 1990s. People learned about radiation through their own experience of health problems like cancer, circulatory diseases, nervous system disorders, and developmental disabilities. And early death. In one village near the site, child mortality increased five-fold in the first year after testing began, and 396 people died while the Polygon was operational. Current research estimates that up to 220,000 individuals have been affected by the facility but the data on soldiers and staff — who were in closer proximity — remains unknown.

The affected territory is believed to be 304,000 square kilometers and the residents born there before 1991, which accounts for about 1.3 million people, received a one-time payment, a pay raise and 10 additional vacation days.

"They were paid because they could potentially be affected by radiation," says Vladimir Kashirsky, head of analytical research at the institute of radiation safety. "This does not mean that the Polygon directly affected the health of all of these people. We conducted extensive research in collaboration with Japanese experts. More than 20,000 personal files were collected. We analyzed diseases, compared with the health of people outside the affected zone. There is no data confirming that nuclear testing influenced the increase of oncological diseases."

Nevertheless, from the test site to the borders of the Polygon stretch two radioactive "fingers" 100 kilometers long and 15 kilometers wide. The main danger is posed by underground waterways, which carry nuclear residue left behind by underground explosions. Although they appear crystal clear, these waterways conceal levels of radioactive tritium that exceed the norm by 150 times. The highest concentration can be found in the areas where the water surfaces like in the Chagan river, which is the only source of water for many villages close to the Polygon. 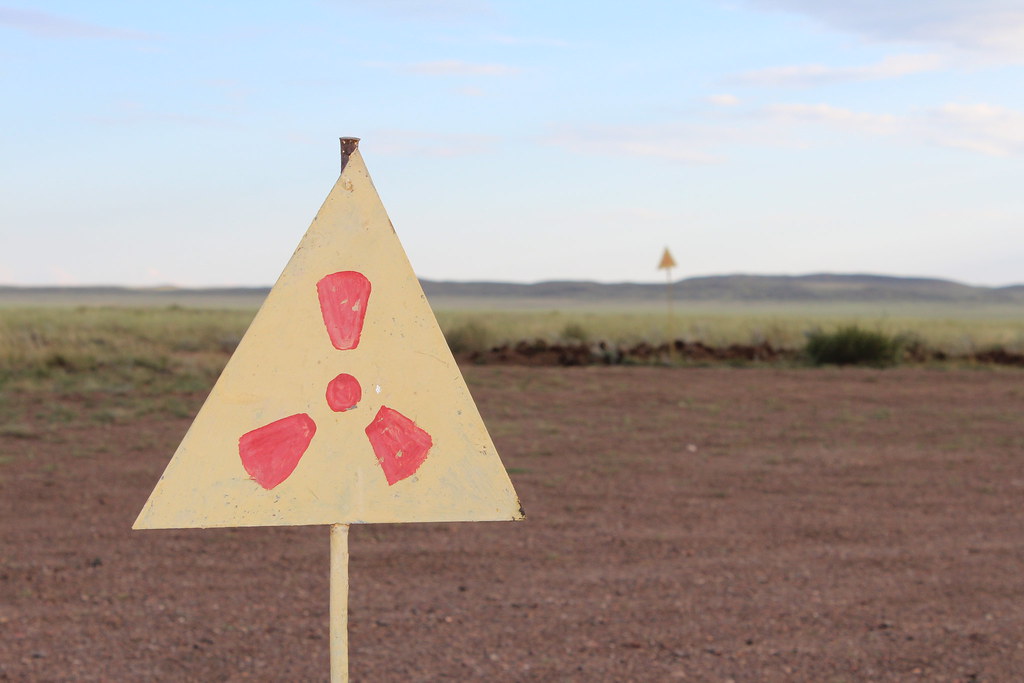 Eastern Kazakhstan has the highest rates of cancer in the country. But this is not linked to the Polygon as much as it is to the extensive uranium mining industry that's prevalent in the region.

The last underground test was carried out in 1989. The Polygon was shut down in 1991 by Nursultan Nazarbaev, the first and current president of Kazakhstan. The effects of radiation was not a major concern at the time. Nuclear waste was dumped into trenches and covered with soil. Contaminated metals were left behind. Since then, scavenging to sell these metals became popular, further subjecting locals to radiation.

The battle against theft began in 1997, when the Kazakh and U.S. governments realized that the facilities contained enough nuclear waste to make dirty bombs. In 2010, Russia joined the decontamination efforts. The country sealed tunnels and wells, dug trenches to protect local fauna, removed radioactive objects and cleared nuclear waste dumps.

Panitsky's team, whose research has been under review by the International Atomic Energy Agency, plans to conclude the analysis of the entire territory by 2021. A main focus of the research now is to determine whether the land can be used for agriculture. "Over 90% of the analyzed area, about 7,000 square kilometers, is suitable for safe living and agriculture," says Panitsky. "We believe that practically the entire territory of the Polygon can be transferred back into economic circulation, with the exception of certain areas, which will remain contaminated for more than 100,000 years."

ABOUT THE SOURCE
All rights reserved © Worldcrunch - in partnership with KOMMERSANT

Well that was quite a first weekend. After Donald Trump's inauguration on Friday, an estimated two million people took to the streets worldwide to protest against the controversial new president, ...

This Kazakh Hacker Wants To Destroy The Academic Publishing Establishment