While the average Dane generates more than 10 tons of CO2 each year, a resident on the island of Samso actually spares the planet three. The island changed its fate by invest

SAMSO — The Vikings, masters of wind, once turned this small island lost in the middle of Denmark into a strategic place. They dug a channel and built a castle, from which they could control the courses of their longships towards faraway lands. And their descendants have planted the masts of their wind turbines on the land and in the seas. Samso is raising the flag of green energies, drawing all of its electricity from the unceasing wind, from the heat of the sun, wood or straw. It now wants to go even further by eliminating fossil fuels from its means of transport.

Reaching Samso isn't easy. From the Copenhagen airport, you must take the train to reach the coastline, before boarding one of the two daily ferries that stop at this tiny piece of land shaped like a spit-curl. It's 28 kilometers long (17 miles) and, at its widest part, barely seven kilometers wide (four miles). Approaching the shore at sunset, you can first see an alignment of 10 turbines in the water. Then you see the blades of 11 windmills dispersed above thatched low-roofed houses.

This is how Samso changed the course of its destiny. "It all started in 1997," says Michael Kristensen, a former carpenter-roofer who reinvented himself in alternative energies. "The Danish government made five islands compete with each other to become self-sufficient within the next 10 years thanks to 100% renewable resources. Our project won."

At the time, the island was slowly dying out. Cattle breeding, pig farming, potato and strawberry cultivation, renowned across the entire kingdom, were no longer enough for all the workers. The slaughterhouse, a major employer, had just shut down. The young people were leaving to study on the continent and weren't returning. The population — 3,700 residents today — was inexorably declining.

"Convincing the inhabitants to get into the adventure wasn't easy," recalls Soren Hermansen, whose parents were farmers. A nature lover who left to bat around on the sea before teaching ecology, he was the kingpin of Samso's green revolution. He now runs the Academy of Energy, a resource, conference and training center that receives several thousand visitors every year. "Where will we be in 10 years if we don't take our future in hand?" 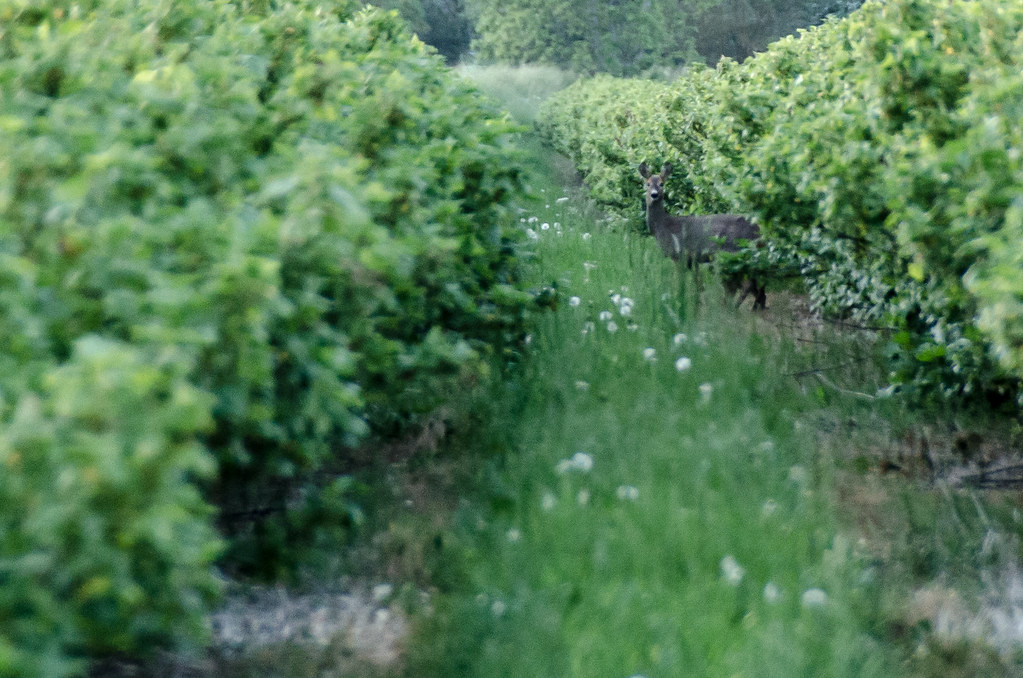 A fawn in Samso — David Huang

There have been countless meetings, inflamed discussions and a fierce opposition. A test of "direct democracy," where each person was heard. The wind turbines were set up where there is the most wind, where the construction cost less and also where they disturbed locals the least.

"Anyway, when you have financial interests in a wind turbine, you don't hear it anymore and you find it pretty!" says Jesper-Roug Kristensen, a former executive sales representative who is working on ecologically renovating an old priory.

These islanders have put money into the project. Almost one-fourth of all households — 450 families — have shares in the wind turbines. The minimum investment amount was 3,000 Danish krones (about $441), but some put in much more. With different motives.

Jorgen Tranberg, who owns a herd of highland cattle — mountain cows with long horns and thick fleece — has a stunning view of his own private wind turbine, which captures wind as well as profits, in the middle of his rapeseed field. He bought it for 800,000 euros and spent double that to acquire half of a sea turbine. "When you spend so much money, it's not just for love of nature," he says. "By selling my electricity, I repaid my costs in seven years. It's a good business. And it's better to produce our energy ourselves than to depend on Russia for gas or the Middle East for petrol."

Inge-Dorthe Larsen, who manages an estate agency in the largest village of Tranebjerg, took three shares in a cooperative and has a different motivation. "If my goal was to earn money, I could have made better investments," she says. "What counts for me is to pragmatically contribute to our energy independence and to the development of renewables."

Samso lived up to its promise, and sooner than scheduled. The land wind farms have been active since 2011, and the sea farm since 2003. This allowed the island, which used to import its electricity from the Jutland peninsula through an undersea cable, to be the first in the world to become self-sufficient. Further, 60% of the current generated by the offshore farm returns to the continent. There are only 10 to 20 days per year, when the wind is too weak, where the electrons go the other way round.

This way, the small island territory has a positive "carbon footprint," because the green electricity it exports does more than simply compensate for the carbon dioxide emissions of the gas and diesel it still imports, by boat, for its cars. While the average Dane generates more than 10 tons of CO2 each year, a resident of Samso actually spares the planet three.

And that's not all. Over the years, four community boiler rooms have been built, fueled by straw, branches and wood chips from pine woods and oak groves, and even through the batteries of thermal solar panels. In addition to this, more than half of the households have already replaced their oil-fueled boilers with wood-burning stoves, solar equipment or heat pumps, while new construction has been built according to low-energy standards.

This transformation has a price. And it's high. In total, the island's sustainable makeover cost 55 million euros, financed by the residents and their cooperatives, the local council, and 8 million euros in aid from the European Union. It's an investment that has, until now, been profitable, thanks to both energy savings and attractive electricity resale rates, which were guaranteed by the government during the first decade. But the tide is turning. The current injected into the network is now bought at market prices, which are much lower. "We're vulnerable to political changes," says Soren Hermansen. "We need long-term stability."

This hasn't stopped Samso from setting another ambitious goal — to cease using fossil resources by 2030. It will have to replace its automobile park with electric vehicles. Already, 40 equip the public fleet and the postal service, with their small orange vans displaying a "zero emissions" mention, combined with photovoltaic recharge stations. For trucks, tractors and the new ferry the local council just acquired, a factory that produces biogas from agricultural and household waste is being built.

With the island going green, more than 120 qualified jobs have already been created. This will not be enough to reverse the pyramid of an aging population, says Mayor Marcel Meijer, who was elected a year ago. He's also counting on Samso's "brand image" with tourists, a new port and more frequent maritime connections, to revitalize it. But, he adds, “We must take our share in the fight against global warming and the rise of waters that threatens us, even if it's a small part."

As an experimental laboratory for Denmark, which aims for "zero fossils" by 2050, Samso has become an example for positive energy territories. New possibilities are being explored: fewer but more powerful wind turbines, energy storage systems, more energy-efficient ways of consuming. "The future is unwritten," Hermansen says. "What makes us proud and optimistic is showing that, far from the big climate summits where states refuse to take responsibilities, we can act in concrete terms, to our standards."

"Flexicurity," the Danish labor approach, where it's easy to be fired but also rehired, has helped unemployment remain among the lowest in the world. But the lack of skilled labor creates new demands.

If Nordic people are the happiest people in the world, it is thanks to the state of welfare and cuddling with friends in the candlelight. Today the word for this ritual invades the life of Francophones.