PARIS — President Donald Trump's executive order banning entry into the United States of citizens of seven different Muslim-majority countries has prompted outrage both at home and abroad. But the drama comes with extra layers of intrigue and import for one country in particular: Iran.

For the pragmatic government of President Hassan Rouhani, who reached a momentous deal with Trump's predecessor and other Western leaders on Iran's nuclear program, the ban is a clear sign not to expect an easy ride with the new Republican administration. Rouhani was quick Friday to share his reaction on Twitter.

Let's help neighboring cultures, not build walls between nations. Let's not forget what happened to the #BerlinWall.

Still, it is difficult to know the full scope of reactions within the regime, especially among hardliners who seemed to be welcoming a return of the old confrontations that are of use in domestic politics. Indeed those directly affected by the ban, a minority who might have otherwise have had entry rights into the United States, are not typically people who support the regime (and vice versa).

What makes Iranian sentiment even harder to gauge, in spite of the regime's anti-Western slogans of 35 years, is that many in Iran suspect that officials and politicians have obtained their own second passports, or even U.S. green cards, reflecting their aspirations to one day retire in, or to have their children schooled in the United States or elsewhere in the West. So the ban could affect members of its nomenklatura, at least on an individual basis that very few officials would want to reveal.

The most prominent Iranian affected now was the film director, Asghar Farhadi, who reportedly cancelled plans to attend the coming Oscars ceremony. The reformist daily Shargh carried a front-page picture of Farhadi and the actress Taraneh Alidusti, highlighting their decision not to attend the Oscars.

Alidusti, the daily noted, was praised for this by the conservative parliamentary speaker Ali Larijani. It is rare for Iranian officials to praise actresses, for anything. On January 29, Larijani was reported as dismissing the entry ban over terrorism concerns as seeming "more like a joke." The U.S. government was "gripped by fear of itself," the newspaper Resalat reported him as saying.

On Monday, Vice President Eshaq Jahangiri said that Iran would also impose visas on U.S. citizens visiting and defend the rights of Iranians worldwide. His statements seemed rather meaningless, since U.S. citizens must already obtain visas to visit Iran. If fighting the ban's intention is fight terrorism, he added, Iran was already fighting terrorists "backed by America and certain regional states," meaning Salafists or Al-Qaeda, which Iran insists are creatures of the West. Banning the entry of U.S. citizens was the "least" the government should do, the hardline daily Kayhan urged in a headline.

The U.S. ban, it should be noted, could have negative consequences for Iranian-Americans traveling to Iran, exacerbating a recent trend of selective harassment of Iranians with double nationalities traveling to Iran. French daily Le Monde visited the neighborhood in Los Angeles dubbed "Little Persia," with one longtime Iranian-born resident sharing a bitter joke going around: "We can't go to the house of God (Mecca) because Saudi Arabia doesn't want us, now we can't go to the home of Satan because the United States doesn't want us either." 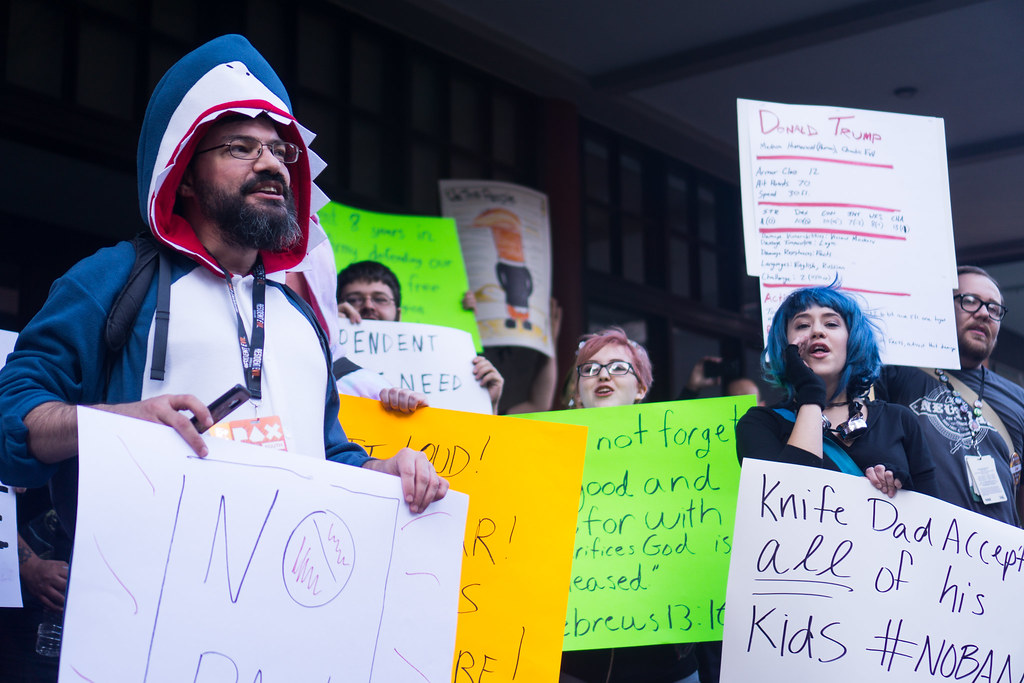 Among the many protests in the U.S. after Trump's executive order — Photo: Daniel Cuadra

A deputy-speaker of parliament, Mas'ud Pezeshkian added that the ban showed the United States' defense of human rights to be a sham. "America should speak of democracy when it stops putting up walls against other peoples," he told IRNA.

Meanwhile alluding to domestic politics, an editorial in the reformist daily Aftab-e Yazd, titled "What Trump's Madness Has To Do With Rouhani," reflected that while the ban was "dirty in humanitarian terms," for certain elements in Iran it could be "delightful."

These, it specified, were a "crazy lot of people" opposed to the Rouhani government and its nuclear deal. "They don't need to waste all their energies" bashing the deal, it stated, because their "collaborator on the other side of the world" would "kick" the deal "until it becomes useless."