DIBRUGARH — A blazing sun is shining on Jyoti Khaund's plantation, where rows of green foliage stretch as far as the eye can see. This hot and damp district in the Brahmaputra Valley, in the northeastern state of Assam, is where India's best tea is produced. But Khaund is frustrated this morning looking over his land: 20 of his 35 hectares are covered with dried plants.

"Once again the rain was too heavy," says Khaund, who grew up here and has been running the plantation for 27 years. "Last April the flood had clogged the ground and smothered the plants' roots. We replanted but, as you can see, they are dying again."

In Dibrugarh, many producers suffer from this strange condition — a short period of devastating rain followed by appalling drought. This wasn't always the case. The rain used to gradually intensify through the year creating an ideal climate to produce tea.

Khaund remembers this as if it was ancient history. "More than 15 years ago, rain started falling very slowly in March, then increased in June, July and reached its peak in August. But this year, we were flooded as soon as April and then struck by a period of drought in August. We can no longer predict the weather."

Khaund's testimony is not surprising to Rajiv Bhagat, who works at the Tocklai Tea Research Institute in Assam's Jorhat city. The study he conducted for the United Nations Food and Agriculture Organization shows that the average temperature has risen by 1.3 °C over the past century in the region. Meanwhile, the annual amount of rain has dropped by 200 millimeters.

We can no longer predict the weather

"For about 30 years, the weather has been upside down," says Bhagat, an expert on global warming. "The distribution of rainwater is less and less balanced. Extreme droughts and floods are becoming recurrent in India but also in other producer countries like China."

The Tocklai Tea Research Institute, which is surrounded by gardens, is a peaceful place. But in Bhagat's office, statistics and infographics paint an alarming picture. They estimate that maximum temperatures would rise by several degrees in the next 35 years. According to Bhagat's forecasts, it could prove impossible to produce tea anywhere in the region by 2050. 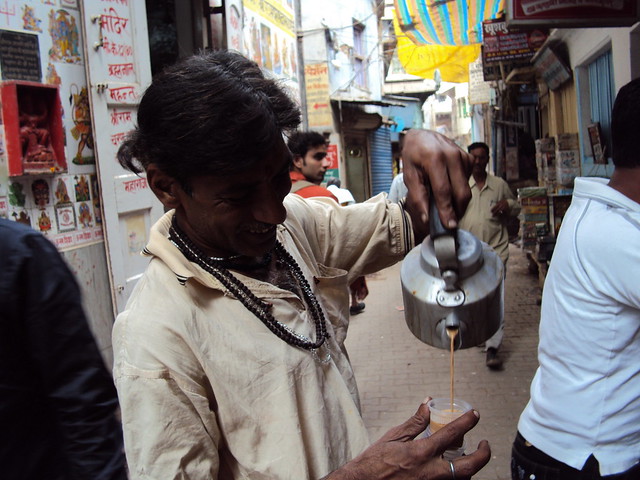 Assam tea alone accounts for 17% of the global tea market. That amounts to about 600 million tons of tea a year — half of India's total production — and employs more than a million people. Consequently, the whole industry is looking for ways to adapt to climatic changes.

On each side of the road that winds up the Brahmaputra Valley, sprinklers have been erected. Some producers have begun to water their land as soon as August. During floods in April and July, electric pumps were used to drain rainfall.

These techniques are vital but expensive. "It costs too much, so we only use it as a last resort," says Manish Bagaria, a young owner of 350 hectares of land at the edge of Dibrugarh. He uses pumps, which need generators and fuel to work, but he has not yet invested in sprinklers. Last year's drought decreased his production by 20%. "If the weather continues to change like that, we will have to change as well within the next two years," he says.

In the future, they may consider using genetically modified organisms.

"You need to be a strategist," says Romesh Boruah, 60, who runs Tocklai's local branch in Dibrugarh.

Dressed in a khaki fishing jacket and sitting behind a desk cluttered with maps, he says his team of researchers examines each piece of land closely. "We tell the producers where they should settle down to avoid floods and drought," he says, sipping black tea. "We cannot grow tea anywhere any longer."

At the laboratory in Jorhat, Bhagat's team clones plants that are resistant to extreme conditions. In the future, they may consider using genetically modified organisms.

Can these measures save Assam's tea? For now, there has been no major impact on production. But producers are worried about their cost of production rising with the measures needed to cope with climate change, making it harder to compete on the global market.

"For now we handle things, but for how long?" asks Bagaria, who worries about global warming's effect on tea and, more broadly, agriculture. "In any case, above a certain temperature, we will no longer be able to grow good quality tea. If we don't do anything to stop this change, the industry will have a hard time surviving."

India's Supreme Court made it compulsory to play the national anthem in cinemas. And you better s...

In India's patriarchal society, there's a cultural tendency to favor boys, which leads to too man...