In the port of Valparaiso, Chile - Rolando Vejar

Trade with Asia will be all the more important for Latin American countries once President Obama leaves office.

SANTIAGO — In late November, Chinese leader Xi Jinping received a loud and long standing ovation — in Peru of all places. The occasion was the APEC Summit in Lima, in front of an audience of mostly Latin American corporate leaders enthusiastic about Xi's promise to boost trade and investment along the Asia-Pacific rim.

As incoming U.S. President Donald Trump dismisses international treaties and threatens trade wars, China is well positioned to replace the U.S. as regional trading heavyweight. And while Trump has vowed to scrap the TPP or Trans-Pacific Partnership, a pact excluding China, the latter is responding with its own Asia-Pacific free-trade treaty.

Brazil, Peru and Chile already export more to China than to the U.S., while China is the second export destination for Argentina and Colombia. China invests around $10 billion a year in Latin America with accumulated investments worth $90 billion. All of that is expected to double within 10 years, and China has already extended more loans in the region than the World Bank and Inter-American Development Bank combined.

The U.S. still wields enormous weight in the region as an investor and trading partner. Its multinationals and brands are everywhere. That's why Trump's threats against free trade — already turning into actions — are such bad news for the region. Mexico, in particularly, could face a veritable tragedy: 82% of its exports go the U.S.

The region must face this U.S. aggression with a two-pronged strategy.

The first, obviously, is to resist Trump's protectionist measures. One might be tempted to back Mexico's Jorge Castañeda, an ex-foreign minister who wrote in the New York Times that Mexico should simply refuse to renegotiate the NAFTA free-trade treaty. As he pointed out, any renegotiation requires legislative approval, and it may be that the U.S. Congress proves more indulgent with Mexico than Trump. There, Mexicans can mobilize their trading and business allies — including, perhaps, quite a few Republican lawmakers — while also working to win over Canada, the third NAFTA signatory. But by refusing to renegotiate, Mexico will give Trump the option of using his presidential powers to kill NAFTA with nothing more than a six-month notice.

The second thrust of our strategy against U.S. hostility must be to swiftly strengthen ties with the Asia-Pacific zone, especially China. This would link us more closely to the area in the world where trade is growing fastest and to which our region naturally belongs due to its vast Pacific coast. Betting on Asia would inevitably strengthen Latin America's negotiating position with the U.S. 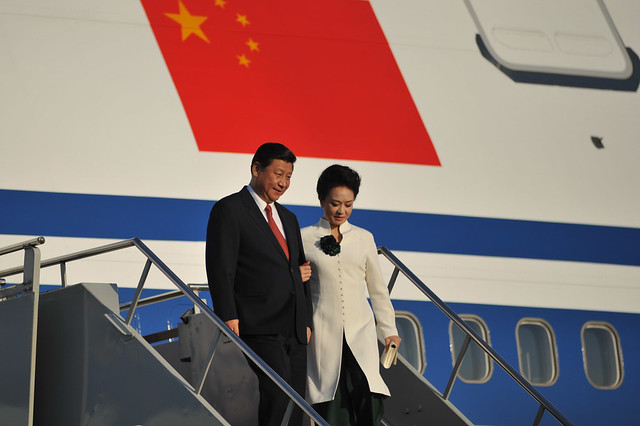 President Xi Jinping and his wife arrive at the 2013 APEC summit — Photo: APEC

There has been some progress on this front: China already has free trade agreements with Chile, Peru and Costa Rica and is negotiating similar treaties with Colombia and Uruguay. It has also taken advantage of Trump's threats to kill off the TPP by relaunching its Regional Comprehensive Economic Partnership (RCEP), which covers 36% of the world's exports, compared to 28% covered by the ailing TPP. China is also using these channels to boost the Free Trade Area of the Asia Pacific, which in principle would include Peru, Chile and Mexico. All Latin American states of the Pacific, and indeed those on the Atlantic coast as well, should express their willingness to join this pact.

As the U.S. and Europe suffer spasms of nationalism and protectionism, Asia and Latin America are widening the door to global trade. The Pacific Alliance (Alianza del Pacífico, or AP, as its known in Spanish) between Mexico, Colombia, Peru and Chile clearly indicates this intention and has become one of the most attractive platforms to harmonize trade and boost mutual and external investments. The AP is already proving to be a force behind the rise of Latin American multinationals.

Now it can spearhead Latin America's strategy of rapprochement with China and Asia and specifically lead talks to join the other existing structures, like RCEP or FTAAP. This could also be the time to bring in South America's MERCOSUR trading bloc, which has parted ways with socialist Venezuela and, thanks to political shifts in Brazil and Argentina, is in a better position to open itself up.

Beyond a mere tariff accord, a bloc of this stature could create an integrative platform within global value chains, cutting production costs, boosting investments and reducing regional dependence on commodities. With the exception of Mexico, the only Latin American country to really integrate its industry into global supply chains thanks to NAFTA, the region's participation in global trade has fallen from 4% to 2.9% over the past 20 years.

Realistically, however, an AP-MERCOSUR alliance would not immediately solve all the problems U.S. protectionism may cause. The challenge is greatest for Mexico. In the best case scenario, it can hope that four years will go by quickly, with the U.S corporations blocking the government from shooting itself in the foot. But with all its eggs in the NAFTA basket, diversification is clearly a matter of urgency for Mexico. China, its third export market, receives barely 1.5% of its foreign sales.

Diversification, however, can be difficult, since trade has its own law of gravity and exchanges are proportional to the proximity of partners. A more proactive role by the AP — in collaboration with MERCOSUR — closer Asian ties, and continued structural reforms can help Mexican firms occupy new positions in global value chains beyond the U.S.

As abrupt as Trump's victory may have been for many, the applause given the Chinese president at the APEC Summit was equally swift, a welcome sign at a time of unwelcome political developments in the U.S. The Latin American business leaders gathered in Lima set the tone. Now it's up to the region's governments to respond in an equally timely fashion and steel themselves for what looks like a bumpy ride.

The Tragedy Of Trump, Tears Of A Latino Lover Of America

Trump's victory reminds this Chilean writer of some of the worst moments of the past half-cen...