ELEFSINA — Greece must repay 7 billion euros of debt by July. But, as has been the case since 2011, the country will not be able to honor its debt without first receiving the credit promised by the International Monetary Fund and the members of the eurozone in July 2015 (86 billion euros). Athens' creditors are demanding new austerity measures, even though the economy and the population are both exhausted.

Dimitris Panogiotakopoulos' face gets longer as soon as he starts talking about the primary school he heads in Elefsina, 12 miles from Athens, where since 2009 the budget has decreased by 70%. "Every year, the situation gets worse. I've lost all hope that things might improve," he says. "We can't even afford chalk. We've had to organize fundraisers just to buy school supplies."

Kostas Vamvakas, a physical education teacher in the local high school, paints a similar picture. Faced with the urgency of the situation, the two have built a solidarity network. "Some of the kids don't even have a coat on their backs this winter," the teacher says. In the headmaster's office, everybody is wearing their warmest clothes. The heating works, but it's kept at the minimum temperature.

For Panogiotakopoulos, only exiting the euro will put an end to Greece's troubles. He recalls what this coastal working-class suburb used to look like, the refinery chimneys used to churn their black smoke day and night. The shipyards ran at full capacity. There used to be two companies in the metallurgical industry and two cement plants along a highway packed with traffic. Local shops were flourishing.

But with the crisis, drastic reforms were demanded of Greece. The three memoranda of understanding signed by the successive Greek governments with creditors, in exchange for loans to avoid the country defaulting on its debt, dictated a ruthless program: wage and pension cuts, abolition of labor agreements replaced by individual contracts, tax hikes, privatizations, cuts in public spending.

Now, "industry is ruined" says Panogiotakopoulos, who's also an elected representative for the Elefsina-Aspropyrgos district. Along the highway, all companies have closed down. Numerous shops have put up "for sale" or "for rent" signs. In this city, due to be the 2021 European Capital of Culture, one-third of the 30,000 inhabitants are unemployed.

"My sales have gone down 60% since 2009," says Giorgia Fratzeskaki, a hairdresser who fears being forced to close soon. She lives off her husband's pension, although that too has gone down by half. At 58, she's "hoping to last another two years ... but that's a long shot! Taxes are going up and now we even have to pay some taxes in advance. That encourages us not to declare all of our earnings."

Maria Papada, 50, goes further. "My annual income is half of what it used to be: 830 euros a month ($880) but I have to work 14 hours a day. Extra hours aren't paid anymore. Our Christmas and Easter bonuses are gone."

The discussion livens up. "My son works in cancer research," Giorgia's aunt says. "At the university in Athens, they didn't even have toilet paper. He left for Saudi Arabia in November 2015." And they all say,"with the euro and the memoranda, Greece cannot survive."

Christos Triandafilou, a researcher for the Work Institute, points out that more than one third of Greeks are now at risk of poverty or social exclusion, with 21.4% already living below the poverty line. And he stresses that with the successive wage cuts, the poverty line itself has gone down. "It has gone down from 6,120 euros for a single person in 2007 to 4,512 euros," he says. 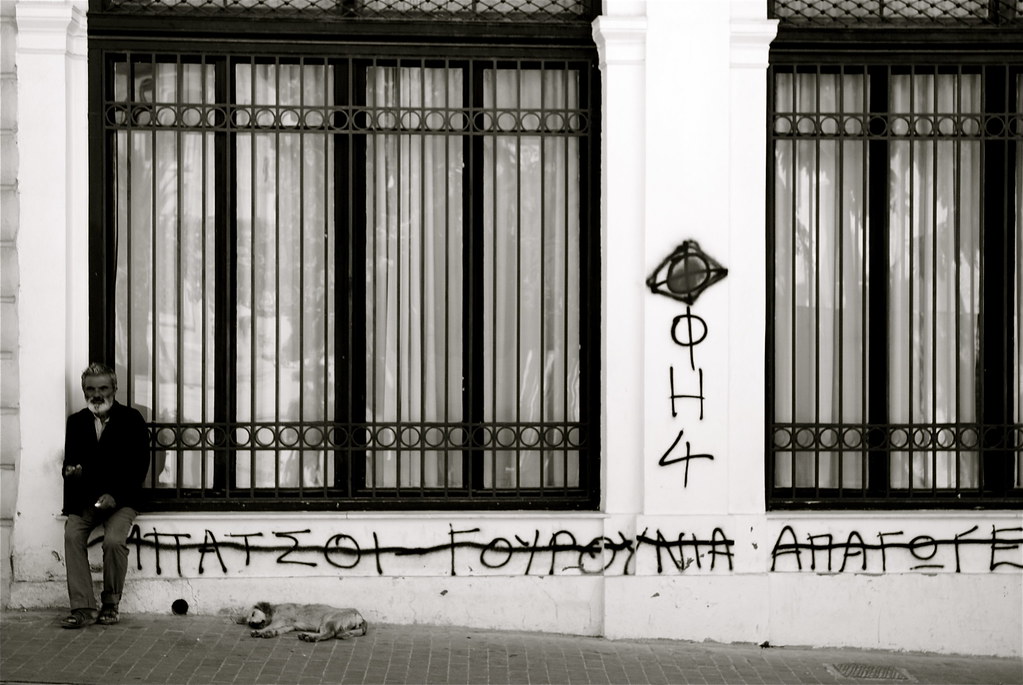 Christos Koutsaftis, a psychologist in Glyfada, a posh coastal suburb south of Athens, says Greeks increasingly don't want to make plans for the future."Instability and insecurity are the two words that best describe the current psychological state. "It's impossible to build a future when you don't even know if you'll still have your job in six months."

After seven years of crisis and three memoranda of understanding, a fourth pact (and more austerity) may soon arrive. In the meantime, everywhere we turn, Greek society looks to be in a state of collective depression.

Greek Election, The Real Reason Any Winner Is Doomed

Despite some hopes inside and outside of Greece that a political coalition will emerge in Athens ...

ATHENS — We were staying in the downtown area close to Athens' ...